CLOSE
Home Life Image is Everything… 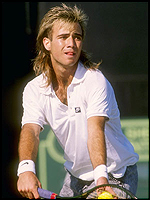 Like Andre Agassi once pitched for Canon Rebel cameras, image truly is everything.

Image is an asset.  Your best asset.  And one you can totally control.

No matter how bright, talented, and skilled you will go nowhere if no one recognizes it. No matter how deficient you are, the world is yours to take if no one notices your failings. Learn to master your image and you have found the levers that motivate people to help you.

It blows my mind how many folks out there don’t understand this. Poke around for some familiar faces on myspace.com or facebook, or for that matter, any ‘local’ band website — you’ll quickly lose respect for some of your friends and acquaintances.

In my opinion, it’s messed up on it’s own to let someone take pictures of you when you’re not at your best, you know, sloppy drunk or whatever, but to post those pictures — I mean, actually sitting down and saying, “yeah, that one is a good representation of me” and then hitting submit is just shocking.  It’s like slandering yourself.  “Don’t I look ‘kewl’ here where I’ve got my face pressed against a drag queen’s tight abs?”  I mean really?

One fellow I know has a shot of him holding up some random bimbo doing a keg stand, while just above it in their profile it states that they’re 32 years old.  Um, hello?

Are people that stupid?  Apparently.

Oh, and don’t hold your breath for any less than flattering shots of yours truly…  I’ve always been aware of my image.