CLOSE
Home Bargains Bargains to be had… or just junk?

Yesterday our local mall, which has been vacant for nearly a decade, had a liquidation auction as it’s scheduled for demolition later this year if everything goes as planned.

I saw it as not only an opportunity to see the inside of the old “crappy” mall one last time, but also as a chance to experience a live auction firsthand and maybe, just maybe, pick up something nice at a real low price.

Most of the items that were up for bid were from the insides of a Chinese Buffet restaurant. It was funny, there were three Asian groups there bidding on everything — once the restaurant was cleared, they all left. Some good deals were out there, though it kinda made me think twice about ever eating Chinese again.  The second hand equipment was not clean.  Not clean at all.  Really, my shoes still feel greasy.

Once out into the actual mall, I got more and more anxious as the auctioneer moved closer and closer to the item I had my eye on.

I had one rival bidding against me on the item. I raised my hand like an idiot a couple of times as we went back and forth, but quickly took on the role of a seasoned pro with a slight head nod to indicate my willingness to go higher. (Chalk it up to the years of eBay experience… no, this was a lot more thrilling.)

Sold to bidder number 40! My heart was racing. The item, as well as a quick high-five with my wife upon being proclaimed winner, generated a few smiles in the crowd. I’d won what I considered the pick of the lot.

Anyway, the item we bid on and won is pictured below. 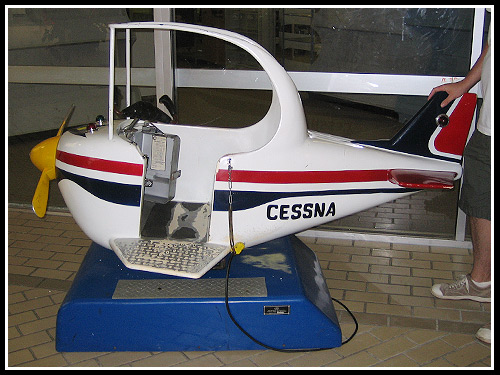 I barely fit into it.

My wife sorta fits into it.

Well, even if I can’t get it to work (we haven’t plugged it in to test it yet. In fact, it’s still at the Mall as it was too heavy for us to lift), I still think it was a great value for something I’m positive that our future children will enjoy climbing all over and just plain sitting in.

If not, I know I’ll enjoy it. Though I’m not an airplane buff, I never rode this particular ride, and I’m not sure I ever even noticed it the few times I went inside this particular mall, I do remember when rides like this were outside of every grocery store, Ames, Zellers, and really any other department store that Walmart put out of business.

And what I remember most is that my parents rarely said “Yes” and supplied a quarter to make the ride do it’s thing, so in a way, this is like the Speak-and-Spell I asked Santa Claus for and ended up purchasing myself 25 years later.