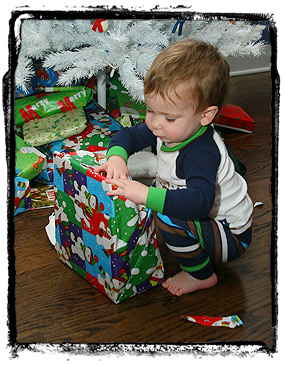 Christmas, like all of the big holidays for a lot of people, is all about family.

Not so much for me growing up. I mean, my immediate family had dinner together 365 days per year.

Every fourth year, starting in 1980, we’d even have dinner together for all 366 days. Imagine that.

Alright, so we ate in the dining room instead of the kitchen.

Now that isn’t to say that we didn’t *want* our extended family to all be together for holiday dinners (or any meals, for that matter), it just wasn’t a realistic expectation for geographical reasons.

My aunts, uncles, cousins, and grandparents (10 people total back in 1986) canvassed the eastern half of the continent. We all easily could have fit at any one of the dining room tables in the family — but we never did.

Not in my lifetime, anyway…

We’re not a close family.

I might have met my grandfather a total of a dozen times. My grandmother — maybe two dozen times.

The crazy part — actually maybe it’s to be expected — is that history is repeating itself.

Duncan only met my dad five times and won’t ever remember him. That kills me. It’ll always kill me but that’s what happens when a family doesn’t stay together in one area.

It’s safe to say that the last couple of generations have spread out.

I used to just take that in stride thinking, yeah, it sucks, but it is what it is. It’s just how we are.

And that’s the distinction that I came to realize at my Dad’s funeral earlier this month. In reality, putting geography aside, we are a close family.

Though my Dad was in a jar, it was the first time ever that my parents, all of my aunts and uncles, a cousin, my sister, and I had all been in the same room at the same time — and on just 48 hours notice.

Seven of us — including my dad — with the same last name in the same room at the same time?

A gathering like that hasn’t occured for over… I’d guess nearly 20 years.

I know that they say that weddings and funerals bring people together and, well, there’ve been a number of weddings and couple of funerals before this one but we’d never once all gathered in the same room at the same time (though that family reunion in 2009 was quite impressive, at the same time, it was also slightly intimidating as it was dubbed a family reunion for my family name and those that actually still carried the name, well, we were drastically outnumbered…so, it doesn’t count…).

Simply put — the circumstances sucked but the surrounding cast was awesome.

This past November 28th and the days following will always be a bit of a blurry memory for me — my real life kinda went into a pause mode of sorts — but I’ll never forget how “neat” (terrible word that hardly describes the scene) it was to be surrounded with such a great and “close” family.