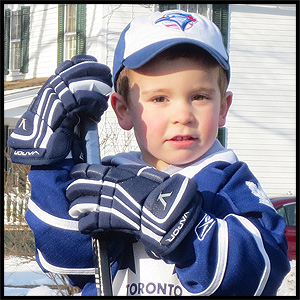 So we’re counting down the days now until my first born turns 4.

For those who’ve been reading the content on this silly website over the years, his “birth posting” probably doesn’t feel like that long ago. Sorry to tell you, it is.

Yep, when he turns 4, he’ll be old enough to sign on with a USA Hockey sanctioned hockey team. He’s excited. And it’s safe to say that I’m excited too.

The downside is that he turns four just as the weather is, well, let’s just say it’s not traditional ice hockey weather.

Sure, with a little effort, elite level teenagers might be able to find a tournament only team to skate with in June, July, and August but a four-year old?

No such luck. Especially in the United States.

But that won’t deter us. We’ll work on his stick handling and hockey sense more this summer (as well as with the soon-to-be two years old brother who I’ll predict right now will be the better player eventually) to give him a HUGE advantage over other kids his age.

That said, I think he’s already light years ahead of most in his age group, skill-wise, anyway, and that’s not just because I taught him everything he knows.

I’m realistic enough to know that he’s likely not the next Wayne Gretzky.

He’ll be a darn fine Mite. He might even be a good Squirt before the other kids start catching up…

(Youth hockey levels have the silliest of names…)

But the key thing we need to work on is his skating.

He can be the best stick handler in the world or even have the hardest slap shot but it won’t mean anything if he can’t skate…and, as of right now, there are definitely kids in his age group, though a very select few, that are much further along.

He’s been on skates now for almost and entire year.

There have been really promising ups… and some discouraging downs along the way.

One week I think he finally has it and then, the next, it’s like he’s lost all ability to balance himself on strips of metal 3mm wide…on ice.

I’m not going to push him like a crazy honey boo-boo type of parent but I’m certainly going to encourage “hockey” every chance that I get.

So far, my enthusiasm is met and both kids take direction really, really well. I’m ecstatic.

The plan is to be on the ice at least once a week from April through September — with a slight chance of a “real” learn to skate class worked in as well.

Most hockey programs require a learn-to-skate class (within their program) prior to joining a team, especially with such a young player, but I’m hoping to bypass that entirely.

He can skate in circles or around cones all he wants with me during a public skate. What I can’t offer is a real hockey environment in full equipment.

He wants to be a “hockey guy”, not take lessons.

I took a learn to skate class as a kid. For me, it felt more like an introduction to figure skating… and that’s not really what I wanted or needed at the onset.

Don’t get me wrong, while I’m not real keen on ever seeing my boys in tight sequin shirts, figure skating is awesome too. The speed a figure skater can generate in two strokes, going backwards, is truly amazing.

It’s no wonder than NHL teams usually have a figure skater on staff (usually female too) continually showing the multi-millionaires how to skate properly to improve their game.

Most figure skaters could skate circles around any professional hockey player. While twirling.

Anyway, for me, while I was a bit older than three at the time, what I needed most was… ice time.

Observation, which my kids get plenty of, and ice-time to mimic the movements.

A 45-minute session with a world class figure skater once per week, while definitely valuable, isn’t what I think would be best for a little kid just getting started.

Two practices a week and cross-ice games on Saturday and Sunday — in addition to a public skate with the family — would make skating like second nature in short order.

That’s what jumping right on to a team will offer.

Are five days a week on the ice too much for a four year old?

My head says yes — perhaps even too much of a time commitment for me.

But my kids want to “play” hockey in the kitchen pretty much all the time so… maybe it’s not too much.

And, as a bonus, my kitchen floor will be spared some abuse.

A Quick Google Saved Me an Extra 10% on Sneakers