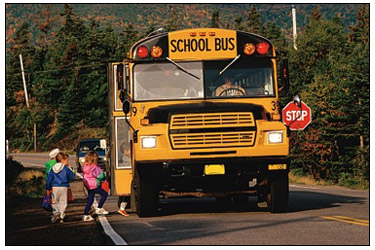 You know what really fires me up?
School buses.

Yep, that’s right.  And I’m not just talking about the short buses for the “special” students.

A few years ago I bought a house in the same town that I work in.

Now, every morning on my way to work, as luck would have it, I get behind a bus that stops at a student’s house and the bus puts on his red lights and the stop sign comes out (and whats up with the new lance contraption on the front bumper these days?  Do buses joust after hours?), and waits for him to come out of the house.

When he does eventually come out, he takes his sweet time, and he’s usually still getting dressed — and often stops to go back into the house to grab his back pack (or kiss his Mom as I like to think).

But anyway, the kid, let’s call him Harold, eventually gets on the bus — and the bus sits there until he sits down.  Apparently he thinks he’s one of the cool kids cause I can only assume it takes so long for him to sit down because he’s making his way to the back.

In my day, once the doors closed behind you, you might have had 10 seconds before the bus started moving again.  Can you imagine if trains ran the way school buses do now?   They’d never move.

So, while you might think that things are moving now; no, two houses later, yes, two.  We’re talking 120 feet — maybe 4 bus lengths (not including the lance) and the lights go back on, the sign comes out, and we repeat the whole process.

The saddest part is that these are HIGH SCHOOL STUDENTS?!  And because of that, being the car immediately behind the bus, I’m subjected to numerous finger gestures from the aforementioned “cool” kids.  Or is it “kewl” these days.  Whatever.  Harry is a loser as far as I’m concerned.

Now, I’m not an impatient person, but when I was in school (and that’s not that long ago), I rode the “loser cruiser” every single day.  I’m not going to say I had to walk a mile, uphill, each day through the snow, I won’t go that route, it was usually maybe 200-300 meters from my front door where a bunch of us from the neighborhood would stand and wait — maybe 5 minutes, sometimes in the rain even, but that’s not the point. And if you weren’t there, the bus DID NOT wait.

Some of my fondest memories are of my next door neighbor chasing the bus and on the rare occasion that the bus did stop again, the walk of shame they were forced to make as they found a seat.

Fat chance of that happening these days.  The school bus is now more like a personal chauffer service.  Sort of explains the “entitlement” attitude of the current generation.  And the fact that they don’t need to walk farther than their front door anymore might help explain all the fat kids out there.

That’s right, I called them fat, cause let’s face it, they’re not chunky and that ain’t baby fat.  And obesity isn’t a disease.  They’re fat.  But I digress…

You might wonder what I’d say if these weren’t high school kids or if my feelings would change…  Well, I’ll tell you.

See, I come home for lunch each day too, which means I catch the kindergarten bus.  Now don’t get me wrong, they’re really cute with their “Dora the Explorer” lunch boxes and stuff and it’s neat cause they actually wait out by the road — definitely a step up from the lazy teenagers.

These kids are excited to get on the bus and go to school, which is great.

It’s too bad that wears off so quickly with the state of public school these days.  (I’ll rant about the luggage bags with wheels they all use later…  Some of them are so damn lazy, they’ve even got wheels in their sneakers… which are velco closure of course.  The height of laziness.)

Anyway, the bus comes, lights go on, stop sign goes out, lance swings out, and traffic stops.  Watching a little 5 year old make that enormous first step onto the bus is one of those things you can’t help but smile at.  But then the mother comes out the front door, still in her robe and slippers, hops into the bus, and has a freaking conversation with the bus driver — a lengthy one too.  Um, hello?  What’s up with that?  Then, one house later, we repeat…

Now, I can understand why a mother might not want her 5 year old to be crossing the street and such.  That’s easy to comprehend.  At the same time, just 15 years ago, 5 year olds *were* crossing the street.  Were our mothers bad mothers; putting us in harms’ way? They taught us to look both ways, then go. Atleast that’s what I was taught.

It seems they don’t teach that any more and I think that’s where the problem began.  Kids don’t know that cars hurt.  And that’s because they’ve never had to cross the street, so their parents haven’t had the need to teach them that, well, cars hurt.  They really hurt.  They can even, gasp, KILL YOU!

The whole “bus stop” in my front yard thing has become the status quo it seems — these lazy morons in high school have never had it any different, so even they don’t know to look both ways, because they’ve never had to.  Scary, because they can drive…  Even scarier, some of them are even parents now too…  Their kids haven’t got a chance… Afterall, cars are everywhere…

So I guess that’s just one of the things that snarks my fries these days.  I look back fondly on my time spent at the bus stop each morning with Bryan, Megan, Alicia, David, Tammy, Seth, Steve, and Nick.  Okay, maybe not Tammy, I never really liked her.  And yeah, sure, when we got to school and filed off of the bus, we all went our seperate ways and were assimilated into our individual cliques, but for those 5 minutes standing on the corner, we were kinda like a big family at the dinner table. And yes, we kissed our mothers as we left the house, on time, to catch the bus.

Did I mention we were all thin, happy, and sociable too?  You know, the way kids *should* be.