In my travels, I’ve hit the lower 48, along with 9 provinces. I like to think I have a pretty good idea of the driving habits on those in North America.

Okay, that may by over stating it just a bit, but I do know that some states have left more of an impression than others.

The most aggressive drivers, (other than anyone in a pimped out Mitsubishi), hail from the state of Rhode Island and the province of Quebec.

These folks will ride your bumper like no one else.

A merge or, heaven forbid, a yield sign mean nothing to these drivers.

The quirkiest part is that although they are generally very agressive, they don’t go into a rage status. I have yet to witness any hand gestures or facial expressions. The just refuse to give you space with a blank look on their face.

The worst drivers though, by far, are those from Virginia. I honestly think that state has so many variations of their license plate design (seriously, over 180 of them!?) so as to fool other drivers into thinking, “Oh, that idiot’s not from Virginia.” Fact is, most of the time, they are. 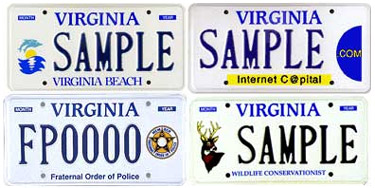 What makes them the worst? Well, for starters, let’s pretend we’re taking the drive from New York City down to Miami.

Generally, you can maintain a speed of around 70mph for the entire trek once you’re clear of the New Jersey tolls.  In theory, you should be able to hang in the travel lane.

But this is where the Virginia driver comes into play.

See, apparently in Virginia, and Virginia only, there is no such thing as a slow, travel, and passing lane. You’re just expected to pick the lane on your choice and the speed, or lack there of, of your choice.

So, it’s about 3:00am and there are just a few trucks on the road, and the diehard drivers like myself making our way through North Carolina.

Thinking we’ve *finally* cleared all of the NJ stoppages, DC traffic, and Virginia is in our rear view, not to mention that it’s the middle of the night, it should be smooth sailing all the way to sunny Florida.

Up ahead, I see truckers moving into the travel lane.

Virginia plate in the slow lane — but now the trucker is moving into the passing lane — ooooh!  He’s even flashing his lights at the slow poke in front of him.

Okay, my turn. I go all ‘Rhode Island’ on this one. I could have easily moved into the passing lane and pass this guy, but that’s not the point.

It’s pre-dawn, there’s a fair amount of traffic on the road considering the time, and this guy is going 15 miles under the speed limit?! The slow lane is empty.

I flash my lights.

I flash them again.

Still doesn’t seem to get it. One of those double trailer trucks eventually flies by on his right hand side.

I flash again. Nothing.

Dude, you just got passed with authority by one of the slowest trucks on the road.

On top of the fact that they don’t have *any* highway etiquette (only state in the union — seriously!), they’ve also ‘caught’ the “what’s a signal for” but that’s plagueing the entire continent.

More about that in the future…