What is the big deal? All of the local affiliates have been leading their broadcasts this week with news of the price hike to gasoline. You know, interviewing ordinary folks while they’re pumping gas — then zooming in on the total. All very predictable.

Obviously I’m one who keeps track of my spending. And so far, even with the price rising, it’s not affecting my budget at all. It’d have to raise atleast another $2/gallon before I’d even have to reconsider my driving habits.

When I started driving, I think the price per gallon was around $1.23. Great deal — even then while on minimum wage. Now, nearly 15 years later, the price I can see here from the office is $3.19 — which is apparently up nearly 26 cents over the past few weeks.

For simplicity sake, let’s say you fill up your 10 gallon tank 3 times during the span of a month. At $3.16, your monthly gas expense would be just shy of $95. Now, just a few weeks ago, when no one was complaining about the price of gas — say the price per gallon was $2.89 — the monthly cost would have been around $87.

And their ignorance is even more insulting when you see the people being interviewed sip from their Dunkin Donuts or Starbucks cup as they watch the numbers fly by. Wonder if they know their monthly coffee budget likely rivals their total gas budget on a month-to-month basis? I doubt it. 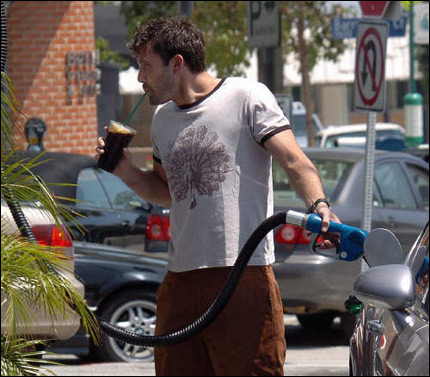 The real problem with the price of gas are the taxes the individual states ninja in there. My home state uses a “percentage” rather than a flat gas tax. So, as the oil companies raise the price of gas, they also line the pockets of the state governments. That’s messed up.

A flat tax would make perfect sense (though I’m not sure why gas should be taxed exclusively in the first place — just another revenue stream for the government that somehow made it through) — the state legislature sets a budget, the Governor approves it and we go from there.

But the way it is now, the recent increase isn’t really due just to the oil companies — the government just quietly raised taxes at the same time creating a totally unexpected surplus on their end. A surplus that they’ll undoubtedly spend.

The percentage based tax is what the masses should be upset about.

That, and the ridiculous price of coffee.