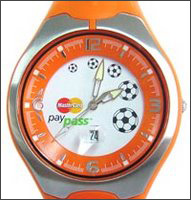 Remember those? For me, it was somewhere around 4th grade — the Cabbage Patch Kid craze had finally started to tail off and the new item to have was the Swatch Watch.

The goal was to get the craziest wristband colour combinations and then top it off with that little rubber band contraption to protect the face of your overpriced $60 watch made of plastic.

Then the goal was to wear more than one at a time.

At the time, I think I probably wanted one. I may have even asked for one for Christmas, I’m not really sure.  Eitherway, I never owned one.

Most things that I’d asked for in my youth that I never received (Speak-and-Spell, for instance), I’ve ended up buying recently on eBay to basically catch up on what I’d originally missed out on 20 years ago.

For the record, the Speak-and-Spell totally lived up to expectations. Even at the age of 30.

Anyway, yesterday I was reminded of the Swatch watch of the 80’s in a press release I read announcing that MasterCard Worldwide had announced the launch of the first watch equipped with MasterCard® PayPass. (I wonder if it comes with one of those little rubber band things to protect it? Maybe you can just auto-bill it to the watch?)

Consumers can simply tap their new watches on the PayPass reader to make the equivalent of a credit card purchase at more than 600 merchant locations in Turkey, including major names such as Burger King, Starbucks, Cinebonus, TAV (İstanbul Atatürk Airport Otopark), and the İstanbul Ferry Corporation. The PayPass watch allows users to make purchases under 15 euros, with no signature or PIN required. Larger purchases will still require a signature.

Like the original Swatch watch, it’s a European thing to start – if the bright colours and soccer balls weren’t enough of a clue.

I’m sure it’ll cross the pond by Christmas though. And guess what?

I’m not asking for one. I mean, I understand the desire for convenience, but this is a little bit ridiculous. I’m not about to “wear” my credit card.

The sight of all of the people wearing their cell phones these days is silly enough — now you can wear your credit card too.

Accessorizing has gone too far.

Making Room in May…with a Purge