This morning, the first $8k check to the contractors cleared (even though I post-dated it for June 11). The ball is now rolling and I’m getting excited to finally get the whole thing going even though it’s putting me back in the hole financially.

Last night, we picked out and purchased the door hardware for the front and side doors that we’re having replaced. It was tough to pick a style or even a colour when we still don’t really know what colour the wood grain on the door is going to be. We decided on a brushed nickel finish — though it’s got a bit of a copper finish to it.

My wife also finished clearing out the attic. We hadn’t really ventured up there since the roof was completed in December of 2006; let’s just say there was some yucky debris…everywhere. A quick shop-vac run took care of that.

We also tore down some of the paper stapled up to “hide” the insulation. It wasn’t hiding anything, and it was hanging down and just looked sloppy. We also rearranged a bit to make it easier to the contractors to get to the windows in the gables. I hesitate to say that it looks good, but compared to what it looked like just last week, yeah, it looks good.

This weekend, I still have to remove some of the unused knob-and-tube wiring up there and then somehow cap off the live lines that extend over to our detached garage. Yes, we have our own personal power lines that run from the house to the garage through the air. Don’t ask. 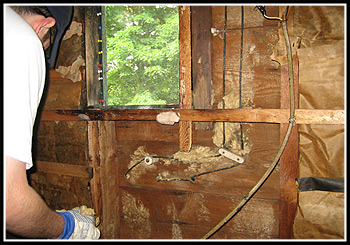 The downside of doing this is that the garage will no longer have power, but I’d hate to have the vinyl siding elaborately go around something so outdated. This way, the exterior of the house will look nice and right now, that’s priority number one.

We also have a few holes along the roof line that various critters like to call home at various times during the year. Right now I believe it’s vacant. The birds have moved out. And the squirrels won’t move back in until the fall.

I think if I pull down some insulation (right near where the wires I’ll be working on are), I’ll be able to see into their home — and out of the holes from the inside.When we had the roof done, the roofers plugged the holes with some wood blocks.

Sadly, those were nothing but a mild inconvenience for the squirrels. Persistent little animals. This time I want to plug them for good and somehow make it so that they never return. Apparently fox urine does the trick. But getting a fox to pee three stories up may be more of a challenge than I am up for.

Either way, I’d hate to have them work their way through the brand new vinyl that goes up in a few weeks.