Saw this in the local paper this morning…

Beginning July 1, the State petroleum tax is set to rise 6.72 percent to 7.53 percent, adding an extra 2 cents per gallon.

Seriously, I’d venture that it would be an accurate statement to say that your typical American struggles with the whole concept behind fractions. Hey, fourth grade math was tough, right?

Further, percentages are like fractions. In fact, they *are* fractions. Let’s not kid around.

Now, one step even further, in this article, they reference a percentage of a percentage?! Do you think many of the readers (actually, do the general masses even read the paper or watch the news?) can get a good grip on that? I highly doubt it.

Maybe that’s why they dumb it down for the simpletons, aka the general masses, by tacking on the “2 cents per gallon” bit at the end. But it’s not that simple.

By August, this 6.72 percent tax increase will likely be nearing $0.04 per gallon.

Funny, too, how they never mention in the article how much, per gallon, you’re already paying for this State petroleum tax. 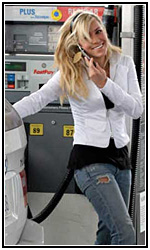 It is listed as a percentage, of course, on nifty stickers on every pump, but they don’t stick them front and center — you know, like a surgeon general warning on a pack of smokes.

Taking into account the federal taxes also built into the price of gas, if the public really understood where most of their payment is actually going and that gasoline really isn’t that expensive after all, well, it just might be time to break out the battering rams and catapults for a good old fashioned public uprising.

Shame that will never happen because so few care to read the sticker. And politicians don’t want to disrupt their easy, and somewhat hidden, income stream.