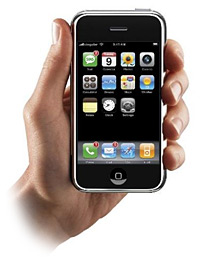 Let me start by saying that I’ve never been on the Apple side of the fence. And I’ve never considered hopping that fence either.

I was going to hold off on this post until Friday, to time it with the iPhone’s launch, but I didn’t really want to add to the ridiculous hype already slated for the release… so here’s my take on it a few days early.

As you may have guessed already, I’m not going to buy a $600 iPhone (ever), but I am interested in how the market will respond to the device. Apple’s marketing machine is second to none, with a great track record to prove it, so I’m sure they will sell millions of these overpriced gadgets, but this is the first time they’ve drifted into an already saturated market.

How will it do, facing huge, not to mention established, competition from Treo, RIM, HP, Motorola, Samsung, LG, Sony Ericsson, and Nokia? Not one of those companies will be pushed aside easily.

And, nearly all of those companies already offer a device that can and will do what the iPhone does, except they do it much better, have been for months, for half the price, and that can fit in the palm of your hand.

What is Apple bringing to the table that isn’t already commonplace? What is the hype?

With the iPod, Apple exploited the fact that the MP3 player market had no clear leader. Sadly, for the general public, there are MP3 players available at Walmart for under $30 that exceed what the iPod does… weird how an overpriced memory card with a jack for headphones became a cultural icon — but that’s Apple’s marketing at work.

So, really, what does the iPhone offer that the other phones don’t? The touchscreen interface seems to be what a lot of the buzz is about. Oooooooohhhhh…

In all honesty, the whole touch screen with gestures deal seems like more of a gimmick than anything super useful. And not to be gross, but unless the touchscreen is fingerprint-proof, you’ll also be carrying around a microfiber cloth to watch your movies in oil-free goodness. Just think how much oil from your skin will transfer when using it as a touch interface or from your ears during a call. Just being realistic.

Oddly enough, being a bit of a geek, I also find it peculiar that a phone manufactured by a computer company would create a cellphone that will not serve as a wireless modem for a laptop, err, iBook. Is Apple abandoning their computing roots in favor of re-inventing Sony WalkMans and Nintendo GameBoys? Apparently.

And look at the size of the thing?! It’s almost as big as my corded phone at home. It’s like people are getting excited again about those brick phones from the 1980’s. Start lugging that thing around, you know, to impress people. Anyone still carrying a boombox on their shoulder? You will be soon, it seems; if the Apple trend continues.

Technology is totally going backwards. A couple of years ago, people wanted a 60 inch plasma TV with a surround-sound system but now the goal is to watch a movie on your phone with tinny sound through cheap headphones… I don’t get it.

Am I strange in that all I really want my cellphone to do is make telephone calls? Sadly, the reception on every cell phone I’ve ever owned leaves something to be desired.

Maybe if the previously mentioned phone companies concentrated less on the gimmicks like ringtones and camera features, the phones would actually work like, well, the old corded phones. Now that’s a feature I’d like featured on my phone!

Can you hear me now?