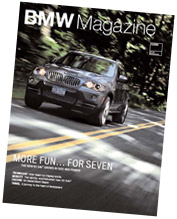 Last week in the mail I received a copy of BMW Magazine. It’s come in the mail sporadically, I guess, since I bought my BMW.

I never paid much attention to it.

Actually, I take that back, I believe I planted my very first issue on my coffee table, displayed prominently at a ‘casual’ angle (like the one pictured) back when I was single and living in an apartment to give off the image of being a high roller. Sadly, I’m the only person who saw it sitting on that coffee table.

Anyway, it’s certainly not something I’d ever subscribe to on purpose and I can honestly say that since that first issue, I’m not sure I’ve taken the plastic wrap off of another issue… until this past weekend.

My wife opened it up and started flipping through. Wow. Can’t say I’ve been exposed to many magazines that have Cessna advertisements in them. Not that I need a new Cessna or anything…

How about an article about installing a clear floor in your private jet to showcase your 7-series in the cargo hold? Seriously, this stuff should be in a Bentley Magazine.

I guess I don’t consider your typical BMW owner (or Mercedes, Porsche, Lotus, etc…) to be in the same class as folks who own private jets large enough to park a car in. But hey, if someone out there wants to group people like me in there, I’m not going to complain. No matter how far from the truth it is.

So, you know those annoying thick paper stock cards magazines have in them that “force” you to flip to certain pages? Well, BMW Magazine has them too, but get this… One of them was to request your own free DVD of Al Gore’s movie, An Inconvenient Truth direct from BMW.

Postage-paid even. I mean, this is really free. No strings attached. I don’t even have to test drive a car or anything?!

Now, I’m not really on the forefront of going green or anything, and I’m sure the movie has been on Discovery Channel a few times at this point, but I still haven’t seen it. And I am kinda interested in seeing it. And for free? On my own time? You can’t beat that.

So, apparently ownership does have it privileges. Now I need to add trying to dig up all of the back issues I never opened to my list to see what other freebies I can get…

On a related note, I still haven’t gotten my BMW back. Apparently BMW no longer manufactures the wheels I had and it’s holding things up. Bummer.

Confession of an Addict