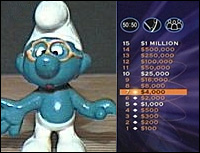 Last week, my wife and I were discussing the aspects of falling into a large sum of money while watching one of the ridiculous new prime time game shows that seem to taking over network television. This particular one was on ABC and hosted by Jimmy Kimmel — the name escapes me. Yes, the show really was that forgettable.

Anyway, the topic was really, “How much would it take to make us happy and change our lives for the better?”

Would something like $10k do it? What would we do if, tomorrow, we received a check for $10k?

We’d throw it 100% at our credit card debt. Sadly, though, $10k isn’t enough to wipe it out — and realistically, it wouldn’t change our life one way or the other. Not one bit.

Now we’re talking… Right now, $20k would wipe out all of the credit card debt and take a large chunk out of our auto loan. Would that be life altering?

Yes! The added savings that would result from not having those debts would accelerate our payments on the mortgage and our contributions to savings greatly.

A quick $20k boost would, no question, alter our bottom line for the rest of our lives — I’d even go so far as to say it would guarantee us hitting the million dollar mark at a relatively young age.

Sadly, in today’s society, you can’t walk from one of these game shows on television with a mere $20k without being boo’ed. And to me, it’s scary that many people don’t realize that a sum as small as $20k can be life altering. (I know, I know, this coming from the guy who just said that $10k is essentially nothing.)

For us, right around the $20k mark (after taxes) is “our” number. For someone else, it just might be the $10k I consider useless. Everyone is different, obviously.

With that in mind, it’s frightening to see some of folks on these game shows with admittedly modest incomes having ten times that amount coming to them, guaranteed, but they feel the need to risk going home with nothing just for the chance of making it 20 times larger.

If I were fortunate enough to be on one of these game shows, I’d likely push the stop button, or pull the magic lever, or hang up on the banker once I hit “my” number… but that’s probably why I’m not likely to be invited to be on one of the gameshows… I wouldn’t make for entertaining television.

“Jimmy, I’m going to take the money and run.”

“But Brainy, you’ve only answered one question?!”

Just something to think about — what’s your magic number?

Photo of the Week: Obama House