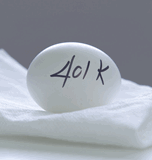 Today was payday and I more than doubled my 401k contribution last week so I was, as a result, prepared to take a major blow to my take home pay but… it only knocked off $110.

I was ready to have it drop nearly 3 times that much?!

If I were thinking clearly, I’d submit the form to the the plan administrator to double (or triple) it right now for the next pay check, but I’m not going to because I really want to maintain the streak I’ve been on when it comes to paying down credit card debt.

This lesser blow makes that very do-able and I can stratch most of what I laid out last week.

Once the credit card balances are under 5 figures, I’ll be sure to up my contribition again.

In the meantime, it’s nice to know that I can throw an additional $160 or so towards my 401k each paycheck and only suffer a $110 hit to my take home pay. That’s a great return. Tack on the company match, and it’s like getting $100 for free every two weeks.

I’ve seen calculators online that let you play around with your contribution amount and how your resulting take-home pay will pan out, but I’ve never found one to be very accurate. It’s a pretty complex calculation when you toss taxes and insurance into the equation — and it would be different for each state and tax bracket, which is probably why I’ve never come across an accurate one.

Some number out there makes you the most while taking the least — it’s just a super pain to find out what that number is. Any ideas?

Discover Card: Another Reason I Don’t Carry One…