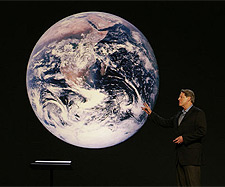 So, Saturday night, being ever so frugal, we watched the free movie I received from BMW.

Politics aside, Al Gore’s environment movie isn’t that bad. Not nearly as preachy as I’d expected. In fact, it wouldn’t be that much of a stretch to call it entertaining.

One thing that stuck a chord with me was when he mentioned that the “Surgeon General” warning appearing on cigarettes didn’t put any sort of dent in the numbers of smokers.

In my life, I’ve noticed the number of smokers under the age of 35 is relatively small. I won’t say its due to the warnings on the package suddenly having been acknowledged. The new laws over the past few years restricting where you can smoke has a little to do with it, I suppose, but I think it’s due more in part to the taxes put on cigarettes. They’re expensive. Really expensive.

That brings me to his environmentalist point. He thinks that if everyone does a little to help, the global warming problem will solve itself. I agree.

Things like making the auto makers manufacture more efficient cars — sooner, rather than later. Weaning ourselves off of using coal based power. (The movie stated that the United States gets 49% of it’s electricity from coal-based power plants… Seriously, the US is practically a third world nation in that respect.)

His biggest point was that it takes more than public awareness (or a little warning sticker like on the cigarettes) to get the ball rolling. The government has to get involved with laws or taxes or whatever.

Anyway, one of those little things are the CFB light bulbs, which honestly, I think have caught on, just based on public awareness. In our house, I’d say 75% of our light bulbs are the new CFB kind. Probably 15% are still normal bulbs because the fixtures won’t accomodate the new style.

It has definitely saved us (noticeable) money each month on our electric bill — but this is where the government steps in.

In our home state, the power company — now pulling in less money from it’s customers due in part to the popularity of the CFB — has gone to the state DPUC and requested a rate increase. And you know what? The state will accept it.

So, while we saved some money by cutting out electricity use, the government is going to give a thumbs up to the power company, so that they can charge more.

One step forward, two steps back.

I guess we’re back where we started.