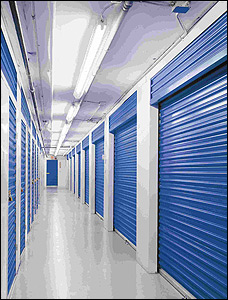 This past weekend we spent a few hours over at the storage unit we’re renting for around $140/month.

Earlier this month, I vowed to clear it out this month so as to stop paying for it. It’s really the only sizable monthly expense left that hasn’t been cut.

Well, it became apparent that, this late in the month, it’s not going to happen before the September rent is due. Even an amount like $140 in the wrong direction hurts when you’re trying to pay down the credit card debt like crazy. Grrrr…

We did, however, make *some* progress. Three full contractor bags worth of stuff went to the dump. The storage space is still filled to the ceiling, but that was still quite a step for me.

One of the stranger things I threw out was a box with piles and piles of Columbia House and BMG catalogs from the late eighties and early nineties. Vanilla Ice on the cover of one, Shanice on the cover of another. They were all stacked neatly — like I treasured them. Seriously, why did I hang on to stuff like that? Ridiculous.

Also thrown away were tons of computer programs on the old 5.25inch floppies. Sure, I’d like to go back and play the original Space Quest again, but in the 20 years since I last played it, it hasn’t been enough of a draw to actually do it. And so, into the garbage it went.

One suggestion my wife had, for things that should really be thrown out but still brought back memories, was to bring a camera and take pictures of the items before tossing them into the garbage bag.

I’m not quite there yet — maybe when I go through the boxes a second time to lighten the load even more before bringing it all back home.

Looks like we’ll be paying for another month. Sigh.

Photo of the Week: Mite Hockey