CLOSE
Home Finance Credit Card Does your Employer ‘Own’ You? 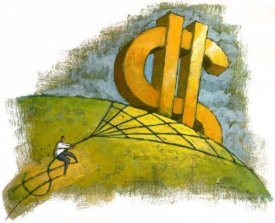 I’d have to to estimate that it was about 5 years ago when the light bulb went on for me. Carrying debt wasn’t the way to go.

Then, credit cards were the *only* thing I considered to be debt. And I carried a lot of it — probably just shy of $30k. Since then, my definition of debt has been expanded.

At one of my jobs, there was a “privileged” group that was supplied with a company car for personal use. More accurately described, they each got a HUGE SUV. It was kept pretty hush-hush — but when a fleet of similar SUVs are all parked in the lot, all next to each other, well, let’s just say, word gets around.

There was a lot of thinly veiled animosity and jealousy hanging in the air for months when it all came to light. But for me, well, I thought to myself, you know, if I happened to be offered a big shiny SUV, I’d be offended. Yes — I said offended. I don’t need one. I can supply that myself, thanks…

Not only would my employer have me held hostage by my paycheck, but also my vehicle? That’s too much weight for me.

I mean, in that situation, if you lose your job or want to leave for whatever reason — you’ll lose your transportation too. That’s a *huge* hit. With out the job, you really have nothing. The way I see it, those folks are now “owned” by their employer — much like how one’s debt (credit card, student loan, mortgage, auto) owns them.

Maybe it’s a pride thing, but I prefer to know that my things are actually mine. These folks can walk around like they’re the greatest thing since sliced bread, but in the back of my mind, I’m thinking, “Hey, you don’t even own your own car…”

I know, in the grand scheme, we’re all prisoners of our paycheck (or employer) in some regard, but even without that paycheck, I know that I’ve still got a lot of stuff in my back pocket, or I will, once I can put the debt behind me. It’s mine. I own it. My employer can’t take that away from me. And that feels pretty good.

All the more motivation to pay down the debts…

I don’t want to be held hostage by anyone or anything. Now to initiate some extra e-payments to Chase, Citi, and Bank of America!

Hitting the Casino for the FREE Entertainment