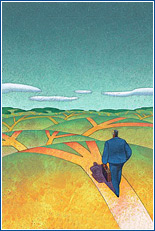 Seems I come to this intersection every few months. I look left. I look right. But usually I just proceed through and just keep on going straight.

What am I talking about, you ask?

Well, I “feel” broke. Basically, I’m cash poor. At least I feel like I’m cash poor. Right now, like last month, I don’t have the funds available in my checking account to pay the mortgage. (Tomorrow is pay day, though, so no worries!)

So, what’s to the right?

A simple way to increase my cash reserve while keeping my debt balances relatively steady.

Currently, my minimum monthly payment total is around $260. Finance charges work out to $50 each month. I also charge around $400 per month. Together, that’s $710 deeper into debt each month.

Now, let’s say I start repaying the credit card companies $710 per month instead of $2287 like I have been for the past 3 years…

That would mean my credit card balance would stay relatively flat, but my checking account would swell by the difference, $1577, every month!

That, my friends, is more than a mortgage payment. And right now, in my current situation, I really like the sound of that.

Well, I guess I hadn’t thought enough about the left. I guess it’s an awful lot like going straight. In hindsight, I should have called it a fork in the road rather than an intersection.

Anyway, this side of the fork involves paying down the debts aggressively to the point that I’m essentially living paycheck to paycheck.

I don’t really have a problem with that, I should be used to it by now, but it just hurts (mentally) when something like the hard drive failure comes up and all of the money sent to the credit card company doesn’t move the balance at all.

I’m broke *and* my credit card balance didn’t move. It’s like treading water — but paying to do it. It’s tiring.

So, in a nut shell, it’s just a decision I need to make about where I allocate my income.