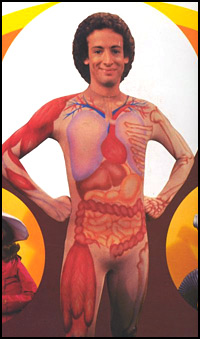 From an article in Forbes last week by Steve McGookin:

With the changing nature of today’s workplace–and workforce–it’s a fair bet that there are plenty of questions you ask every day that maybe your parents didn’t.

One of them might be: “Is my tattoo holding me back as I climb the corporate ladder”?

And perhaps unsurprisingly, the answer is: It depends where you work.

My answer? Well, it certainly won’t help you climb the ladder.

With surveys indicating that anywhere between a quarter and a third of all Americans under 40 now have some form of body art–what the Pew Research Center calls the “Look At Me” generation–the adornments that traditionally marked a rite of passage have increasingly become part of society’s mainstream. A 2003 Harris poll also showed that roughly the same percentage of men and women were being tattooed.

But is body art still frowned upon in the workplace? And does it work against you from a career perspective?

Obviously company policies will vary, as will office dress and appearance codes. According to a study a few years ago by CareerBuilder and Vault.com for Salary.com, 42% of managers interviewed said that their opinion of someone “would be lowered by that person’s visible body art.”

Yet about the same number of managers, 44%, said they themselves had tattoos or other body art that was not “visible.”

I love the double standard of the “Look at Me” generation. I’m a professional by day, wannabe tramp/ex-con by night. It’s almost laughable.

Attitudes will depend on your industry and on your company. The popularity of television shows like Miami Ink and its subsequent spin-off, L.A. Ink, as well as the prominence of body art among sports figures, singers and other entertainers have meant a wider ubiquity and acceptance for adornments.

So fields that encourage individuality and creativity, clearly, will be more open to personal expression. But in an environment where conformity is frequently the norm, especially in many client-focused workplaces with a high level of interaction with the public, you’d expect corporate policies to be somewhat more restrictive.

Companies have to decide what image they want to present, both externally and internally. Where they draw a line is often what they consider “offensive.” So as well as the industry and employer, acceptance can also depend largely on the art itself.

The key word seems to be “appropriate”–but it seems more true than ever that there is a tolerance in the modern workplace for personal expression through discreet body art, particularly, according to the American Society for Dermatological Surgery, where no one sees it if you don’t want them to.

“A good tip is to place it in an area that can be covered by clothing traditionally worn in the workplace. For example, a belly button piercing can easily be covered but shown off if you wish, whereas an eyebrow piercing can not.”

What if, for whatever reason–career-related or not–you experience “tattoo regret”? According to the American Academy of Dermatology, it’s not unusual for a removal process to take several sessions and cost anything up to 10 times what you paid for the original artwork. Surveys seem to suggest that in many cases removals or amendments are because of someone’s name.

And with the growing numbers of outlets–there are now more than 20,000 parlors in the U.S.–tattooing itself is an expanding career area. You can find some tips on getting into the field and improving your skills at ExpertVillage, which–since like any other art form it’s obviously better to see than be told–features a series of videos by Arizona-based artist Rick Wycoff.

So if you’re thinking of becoming one of the many Americans every year who get a new tattoo, how your boss will react–if he or she ever sees it–is just one more thing you’ll have to think about. But, of course, the chances are if you have a tattoo already, it’s unlikely you’re going to feel any differently about it by being told it might hamper your prospects.

I dunno. Even in my 30+ year lifetime, the amount that society has spiralled downward is a little frightening. Earrings on men, make-up on men, plastic surgery for everyone, coloured hair, mohawks, facial piercings, facial tattoos, botox, cross dressing, sex changes, etc…

Really, if you think about it, guys like Boy George and Mr. T were way ahead of their time. They’d be accepted now as “normal” everyday folks. That’s downright hilarious.

In some ways though, I do look forward to the day I have to take my children to swimming lessons so I can see the regret on the faces of all of the aging parents with huge angel wings on their backs… All I’ll have to be embarrassed about is a farmer tan and maybe a little extra weight.

On the brightside, maybe the next Slim Goodbody won’t need to wear a spandex body suit! Wouldn’t that be a sight!