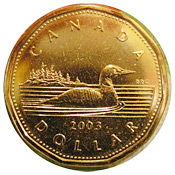 As a proud Canadian, that puts a smile on my face.

At the same time, as someone who lives in the States and intends to long term, it makes me a little uneasy. In the grand scheme of things, it’s probably not a good thing when the pendulum swings this direction.

But again, on the upside, it makes it even nicer when co-workers toss their “worthless” Canadian change my way. Oh, if they only knew.

Too bad it’s so difficult to exchange Canadian change at a US bank… though if the exchange rate gets much higher, I just may have to stop in and ruin an unsuspecting teller’s day!