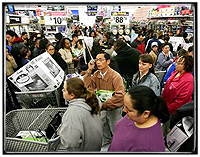 I think I took last year off, but in the past, I’ve always been in the parking lot of Walmart at 4:30 am waiting for the doors to open on the Friday after American Thanksgiving.

No, I don’t line up outside in a lawn chair with a thermos full of hot cocoa. In fact, I don’t line up at all. I sit in my nice warm car (with a can of coke) and walk in at a regular pace once they open the doors.

Not once, using this method, have I not been able to get my hands on one of their “specials”.

Sure, they only have 10 of the fancy televisions, or five of the laptops in stock at each store, but every year, I’ve been able to get to them before they’re gone. (Hint — they usually hide the “good” stuff in the aisles of the women’s clothing department).

The funny thing is, even with these opportunities, I’ve never bought anything from Walmart on Black Friday.

Part of it is that I’m a morning person anyway and it’s neat to have “company” for a change in the morning. I also think it has something to do with my tendancy to want to be “part of the excitement” — even if it’s not my own.

Anyway, with Thanksgiving rolling around next week, the Christmas season is nearly upon us and that means it’s time to start making plans to ensure that it’s a non-debt incurring event.

I remember last Christmas being pretty low key in our house. We’d just gotten married and the roof of our house had just been completed — though the payments for it had just begun. There just wasn’t any money around to splurge on the holidays.

This year, the situation is looking a lot different. I don’t forsee any huge expenditures in the near future. Maybe six-seven months down the road, but I’ll get to that later…

Christmas could be a big event this year — under the new budget, the money will be there, if needed, but I don’t think we’ll take advantage of the available cash. I’d have to ask my wife, but looking back, I didn’t have a problem with how Christmas went last year. No, there wasn’t a lot under the tree, but the payload of new socks is still holding strong today — and that’s good enough for me.

So, with that, it should be business as usual over the holidays in our battle to pay down debt.

Okay, fine, I want a Wii — but I know it will never get the use to justify the cost in our house.

Financial Decision from a Vulnerable Position