CLOSE
Home Finance A Nickel for your Thoughts 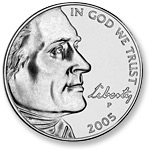 This Thanksgiving, my wife and I attended the big football game between the two local high schools. The game itself was uneventful.

The weather, on the other hand, was quite nice. I actually came away with some color and we even considered taking the convertible out for a ride — not a common occurrence for the end of November!

But the highlight of the day came while we were standing in line to buy tickets. There were two women in front of us in line, and as one of them pulled her wallet out of her purse, a nickel fell to the sidewalk.

She saw it. Her friend heard it — even looked down. Then they paid for their tickets and walked away!?

This wasn’t a penny…

I stalled a bit giving everyone in the vicinity the chance to snag the loot. No one moved. Not even the kids.

We shuffled forward with the line. Still, no one was making a move.

I bent down, picked it up, and dropped it into my pocket.

I was almost embarrassed. Ashamed, even.

It felt really awkward. Bending down to pick up something that wasn’t mine, and that so many people knew wasn’t mine. They had, in fact, witnessed the crime.

It sorta felt like I was being devious — taking someone else’s money. Were people judging me that way?

Or were they thinking I was a cheap?

To think, I bent down to pick up something that no one else saw any value in — but to me, it was, well, a typical Google Adsense click — and I’ll take those any day.

And even better, this was tax free. All five cents were mine.

I have no idea where that nickel ended up. It even could have rolled out of my pocket at the game, but it just blows my mind that people wouldn’t even make the smallest of efforts to pick it up.

I’ll even bend over for pennies, you?