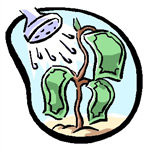 Totally a fictitious question — I haven’t hit the contribution limits and don’t really expect to in 2008, but over the last few weeks, while crunching numbers to maximize my 401k contributions, my eyes were opened to the yearly limits placed on this type of retirement account.

Around ten years ago when Roth IRAs made their big splash, I had a co-worker who ranted and raved mindlessly over how great they were. I was already contributing to my 401k pretty heavily and sending an additional $150/month towards a mutual fund I randomly selected from Fidelity so I just gave it a quick looksie to see what all the fuss was about.

The $2000/year limit (at the time) turned me off. Maybe it’s just me, but that’s NOTHING!? Saving an additional $166/month just wasn’t worth the hassle of opening another account with another institution and keeping track of it — remember, you couldn’t do everything online back then.

Fast forward 10 years and the IRA contribution limit for 2008 is $5000. That’s a little better, but for the past few years, unfortunately (or fortunately, depending on how you look at it) we’ve been up against the income limit for contributing to one anyway, so it hasn’t been much more than an afterthought, but am I missing something?

I’m certainly not an expert on the subject, but five grand per year just doesn’t seem like very much, even with the tax advantages — which when we’re talking about such a small amount can’t be that much of an advantage.

So, back to a retirement account that I actually do have… The contribution limit on a 401k for 2008 is $15500 and as far as I can tell, that doesn’t the including employer match so if you work for a really great company, you could in theory sock away $31k per year. Now we’re talking…

But for most folks, a high enough salary and a 100% match to sock away that kind of money just isn’t in the cards.

I was unaware of the $15.5k limit until recently, and unfortunately my salary isn’t high enough to get me there, but it did get me thinking…

I’ve never come near that number in the past, but I have been averaging $2215/month in payments to credit card companies alone over the past three years. The credit card balances will be eliminated sometime this year, and once that happens, in theory, I could be saving $2215/month instead. That works out to $26584 per year.

They’d hit the 401k contribution limit by contributing just over 5% of their paycheck — not very much. They also make too much to contribute to a Roth IRA (which as I mentioned earlier would be a waste of time as it would only amount to a negligible 2% of their income anyway), so where do they save for retirement?

Now that I’m maxing out my 401k to get the maximum match (though still short of the contribution limit), and I’m nearing the finish line when it comes to debt repayment (which will give me a lot more money to save), where should my expected $26584 each year go?

Mutual funds are my best guess…

I Just Bought a House!