I filed my taxes yesterday. The past few years I’ve flip-flopped back and fourth from TaxCut to Turbotax and back again.

And each year I’m convinced that I’ve made the wrong decision.

The 2007 tax year happened to be a TurboTax year in my house. I like TurboTax.

I don’t like how they make impossible to back out of things.

Now, I don’t live on a farm. But the cute little deduction icon they had was irresistible. It was, I *had* to click on it.

The first question in that part of the interview obviously didn’t apply to me, so I backed out of the section and moved on to more pertinent areas.

Problem was, on the final error check, they’d partially filled out the form that appilied to farmers, so I couldn’t file until I answered how many sheep I had in my backyard and the date I slaughtered them (not the actual questions). Backing out didn’t actually back or blank anything out. The form was incomplete.

A frustrated half hour later, I figured it out, but it’s one of those things that makes me switch products each year — even though both TurboTax and TaxCut have the exact same problems?!

If I weren’t a nerd (and my wife didn’t steer me in the right direction), I’m not sure the average casual computer user could have figured out how to fix this problem — other than by retroactively moving to a farm.

Anyway, the title of this post came from the very of the end of the tax filing process. The “fast” and “convenient” e-filing option they brag about on the box is missing at least one more starburst — and that would be “expensive”.

But the real kicker was when the screen popped up to pay the fee: 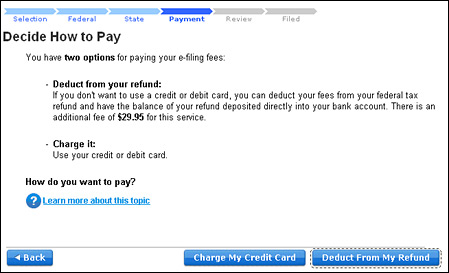 Wow — they offer not one, but two options for paying the e-filing fees! Now that’s convenient!

Either way, tack on the price of the software (around $75) and it might have been cheaper to go to an accountant.

My favorite part is how they default the selection at the bottom of the screen to option 1, so if you’re like me and you install programs all the time, you’re accustomed to clicking, “Next, next, next, agree, next, next, finish” in rapid succession.

I didn’t get caught this time.

But the whole thing is just another reason to hold on to a credit card.

I feel bad for those who don’t have the ability to have a credit/debit card (and are usually poor) — it’s just another example of them getting screwed over again.

(Of course, I *could* always print and mail the forms for much less, but that’s too old fashioned for me…)