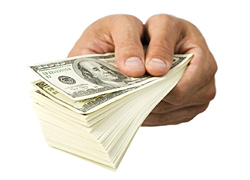 It’s like the line, “it’s not what you make, it’s what you save” quote that’s thrown around so often has finally sunk in.

I used to think that to be “rich” required having a high paying job. But now, I’m realizing that that isn’t necessarily true.

Back in November I stopped working for my highest paying client. The choice was 100% mine and I knew that the lack sudden lack of income could be a problem.

Now nearly 4 months later, it hasn’t been a problem. And it’s not going to be a problem either.

I was always under the impression that my day-to-day finances were what kept things pointed in the right direction but, boy, was I mistaken…

My day-to-day finances are such a tiny percentage of my net worth, and that’s something I never really realized. Investments (and property) are what make up nearly all of the monthly gains (or losses) now..

Most months, the gains in these two categories far exceed my take home pay. By far.

I spend less than I make. That’s the key. And that’s something that I didn’t do in the past (obviously) as I dug myself into $30k worth of credit card debt.

I used to lunch at McDonalds or Burger King every single day during the week. Combined with the change lost in the seats of the car, that was costing me in excess of $40 per week. Now, I don’t eat lunch at all (yes, a problem of it’s own.)

I cancelled my cell phone service with Verizon saving me at least $30/month.

As I’ve watched my monthly finance charges drop from over $400 to under $20 on my credit card debt, I’ve seen the snowball at work — even though I didn’t actually use the snowball method for much of the way. That’s saved me, well, $380/month.

My standard of living hasn’t dropped one bit.

It hasn’t really improved either, now that I think about it, but in the future it will most certainly improve — because I’ll have the money in the bank to do it.

I’d say I was just breaking even when I still had all of those expenses. Now, with just those limited examples, I’ve shaved nearly $600 off of my expenses. That’s HUGE and I hardly even notice it.

Now that the credit card debt is almost eliminated, I’m on the verge of finding myself with that extra $600/month in my pocket! The possibilities?!

It just drives home the point that how much I make isn’t all that important anymore, it’s more about what I do with the amount that I make. Now that I’m doing that wisely, the rest kind of takes care of itself. Kinda like autopilot.

Building wealth is actually a lot easier than I ever expected.