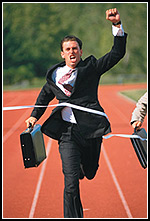 I think that by today’s standards, for a Generation X’er, that’s really rare.

Most of my friends have had, oh, say 5-6 jobs since we stumbled into the real world. Every two years it seems that they’d start sending out resumes talking up their accomplishments at their current workplace in search of a better job.

At times, it has worked for them. They’d somehow worm their way into a higher paying job with each step using the “fake it ’til you make it” method.

But more often than not, they’d be exposed as a fraud, or out of their league, within, well, two years or so. And then it would be time to look for another job.

Kind of a revolving door situation.

Me? Fresh out fo school I applied here — started the next day making $6 per hour. Around a year later, I was moved from hourly to salary. The next year, I was invited to join the 401k plan.

Fast forward to 2008… well, as far as I know, I’m making a lot more than any of my friends and I have a much more stable job.

Could I have started throwing resumes out there every so often?

Sure, but as far as I’m concerned, rewards come more consistantly to people who are honest and work hard rather than people who try to “trade up” every chance they get.

I’m comfortable where I am. I didn’t get this job by saying I could do something that I actually couldn’t. I’m good at what I do. I work hard at what I do.

I don’t have to walk into work each day hoping that I’m not asked to do something that I really truly don’t know how to do. That weight isn’t on my shoulders. And for that I’m thankful.

Whoever said Money doesn’t Grow on Trees was Right…