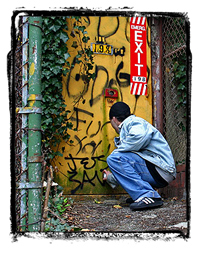 Some people do things just for the sake of doing things.

Some do things because it’s the right thing to do. It makes them feel good.

But then there are those people who won’t do anything… unless they get paid for it and that’s what this post is about.

From a recent editorial in my local paper:

Money, the great seducer of man.

Men and women alike will travel curious paths to obtain money. Grown folks will strap themselves to a lie detector rather than try to answer embarrassing questions to obtain it, steal for it, and still others would turn into police informants for it.

That last part is what a City Councilor is banking on.

After noticing more and more graffiti around the city, the Councilor proposed offering a $1,000 reward to anyone that provides information leading to the arrest and conviction of graffiti taggers.

“I think it’s another weapon that the police can have in the back of their pocket,” he said.

For proof that his proposal would work, have a quick conversation with the neighboring Mayor.

“It’s an ongoing problem with us,” he said of graffiti in his city.

Several months ago, they began offering $1,000 rewards for information leading to the arrest of taggers.

How has it worked?

Since offering the award, the city has made more than a dozen arrests and thus far one person has qualified for the reward.

Why has it worked?

“The motivation factor is important and it’s cash,” he responded.

Cash is the motivation for a lot of things in life. It’s largely in part the reason I’m taking time on a Sunday afternoon to write this.

But, it’s a sad statement when cash is the motivation to help.

Imagine if the “Aunts,” and “Uncles,” who volunteer their time for the Little League tournament demanded money first, or the local high school students that volunteer for the Special Olympics demanded money before steeping forward.

Offering $1,000 for someone to snitch on a tagger isn’t going to change the world. It’s just a means to an end, and a very direct one apparently. The response to the reward was virtually overnight.

There’s no doubt a reward here would work. If you want to make a horse run, dangle a carrot in front of its face. It’s just unfortunate that it would work.

Society, it seems, in general is starting to take a turn for the worse. You’d have to think there are a few local teenagers with dollar signs in their eyes and who could blame them?

I’ve no doubt that this will work — it will — though I must be honest… I don’t think graffiti is a very big problem in this area and usually I’m pretty aware of stuff like that.

But where does it stop?

A real problem in this city, in my opinion, is the tendancy for people to run red lights. Old drivers, young drivers, it doesn’t matter. It seems everyone is doing it.

Is the city going to start offering $1 for each red light you come to a complete stop for? I should hope not… Or maybe I should hope so?

It’s a slippery slope… and sad too.