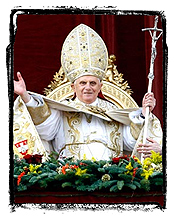 Apparently the Pope recently sounded off with a few new sins to add to the list of seven, one of which will affect most of the PF bloggers out there:

There used to be just seven, but the list of sins that could threaten your mortal soul just got a whole lot longer.

The Vatican has overhauled its list of mortal sins, adding several more to cope with the age of globalisation.

The new sins take aim at those who undermine society in far reaching ways, including by taking or dealing in drugs, polluting the environment, and engaging in “manipulative” genetic science, The Times of London reports.

Also new to the list are paedophilia, abortion, and social injustices that cause poverty or “the excessive accumulation of wealth by a few”.

They join the long-standing evils of lust, gluttony, greed, sloth, anger, envy and pride as mortal sins – the gravest kind, which threaten the soul with eternal damnation unless absolved before death through confession or penitence.

The church’s revised position came as the Pope lamented the “decreasing sense of sin” in today’s “secularised world,” and falling rates of Roman Catholics going to confession, The Times reported.

I guess we’re all going to hell, huh?

The text of the full article is available here.