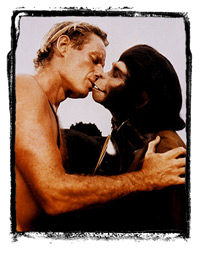 I really liked the Planet of the Apes movies. Even the cartoon shows that they used to air.

I still do enjoy sitting down and watching them, though more often than not, the Marky-Mark version is the one on television these days.

I never did like Charlton Heston though, in the original or the Marky-Mark remake.

To me, in movies, he was a bit like John Wayne or Clint Eastwood.

You know, a good looking guy with a huge ego and zero acting skills.

Funny how all three men are considered “legendary”. I wonder why? (Really, why isn’t Steven Seagal a legend too?)

I disliked him even more for his work with the NRA.  His one-sided ignorance and arrogance on the subject of gun control, and the reverent attitude he received from those who supported him, has definitely hurt this country. Celebrities should not put their weight behind causes.

I’m hoping no celebrity replaces him as the face of the NRA — or if someone does, I hope it’s someone with a little less ego and a lot more substance.

Charles Bronson? Oh wait, he’s dead too… Shame, he might have been a good fit.

(obviously, Brainy Smurf is of the anti-gun stance…)