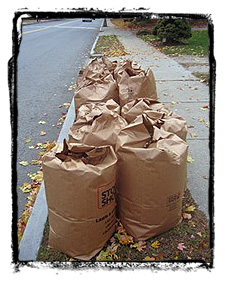 Last week, for the first time ever, we hired a local landscape company to come out and pick up our leaves.

(Before anyone points it out, I know, I know, wrong time of the year for that sort of thing north of the equator.)

Next door to our house is an open lot which we also own. In the fall, it could be summed up as a leaf magnet.

Each year, we clear the main lot to make the house look nice; raking and blowing towards the empty lot.  Probably not the best strategy, but making sure the main lot looks nice takes priority.

From there, our city requires that we bag the leaves in those giant brown paper bags — like in the picture.

Idea is, you bag the leaves, leave them at the curb, and the city will come around and pick them up over the span of about a month — usually in November.

But there are a few problems…

The first problem is probably unique to our situation — lack of time.

Working for the hockey team all of these years has sucked up our weekends. It’s difficult for us to find the time required (during daylight) to rake and bag the leaves at that time of year because, well, simply put, we didn’t have weekends from September through May.

Now that I’ve left the team, that should no longer be a problem.

The next issue is a financial one. The leaf bags aren’t free. They come in bundles of 5 and you can buy them at Home Depot, Lowes, Walmart, Stop-n-Shop, and pretty much any where else that has some sort of “hardware” aisle.

You can price shop all you want, but bottom line, they come out to around 50 cents per bag. Sounds like a relative bargain, huh?

Typically, at the start of “leaf season”, we’d pick up around 10 bundles. Let me tell you, there’s nothing more upsetting than walking out to the car with a bunch of oversized lunch bags that you just paid over $50 for.

And then it really hits you like a punch in the stomach… You just spent $50 on something that you’re just going to throw out in a matter of hours.

Making matters worse, we’ve always had to go back and buy even more bags. As a result, we’ve never actually cleared and bagged the *entire* yard. I always end up mowing the crap out of them with the lawn mower — finally chopping them into a fine powder by around August. It’s embarrassing to admit.

Add in the time it takes to bag over 100 bags of leaves. It hurts.

Once bagged, we’d end up building a huge pyramid of paper bags at the curb — it actually looked pretty neat.

But then the city wouldn’t come on the day they were scheduled.

Some children would topple the pyramid.

A bag would tip over, spilling leaves all around.  You know, that sort of thing…

Worst case scenario, and one that happened last year — an early snowstorm before the we’d even started bagging. Sigh…

Basically, there are a myriad of problems to be had each year… One big headache… Alongside a back ache, a butt ache, and two heavily blistered thumbs.

But this year, we solved it all with a phone call.

My wife called the company one morning before she went to work last week, and when I arrived home for lunch, our extra lot was clear.

We haven’t received the bill yet, but when you combine the savings on the bags and the time and the lack of blisters, we’ll, I’m pretty certain it will end up being a great deal.