Over the weekend, I came across an AP report regarding the blue prints for the NYC Freedom Tower that they’re going to build in place of the World Trade Center:

NEW YORK – A homeless man has come forward with two sets of confidential ground zero blueprints that he says were dumped in a Lower Manhattan trash can.

The man brought the Freedom Tower plans to the New York Post, which says the 150-page schematic is marked: “Secure Document — Confidential.”

The documents are dated October 5, 2007. They contain plans for each floor, the thickness of the concrete-core wall, and the location of air ducts, elevators, electrical systems and support columns.

The agency that owns the World Trade Center site, the Port Authority of New York and New Jersey, calls it a serious security lapse.

Spokeswoman Candace McAdams says mishandling the blueprints would be “cause for serious disciplinary action.”

Now, other than for the company who designed the blue prints (it is their product, after all), what is the big deal?

My inadequate engineering skills can tell you where the support columns are for the building I work in. The elevator shaft is, well, just walk into the lobby, you’ll see it. Push up a ceiling tile and guess what? You can see all of the duct work and much of the electrical wiring too!

Do these specific Freedom Tower blueprints expose a weakness, you know, like a ray-shielded thermal exhaust port along a heavily fortified trench that could lead to the destruction of the entire building? 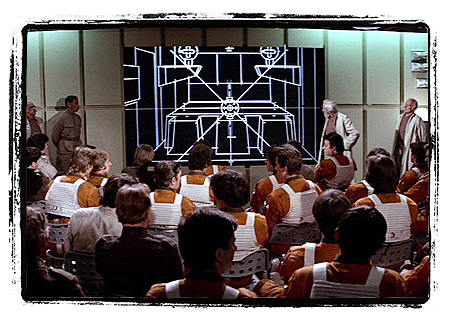 I guess my point is that not every one is a terrorist — it’s just paranoia run amok. And this is hardly the security lapse they’re making it out to be.

This is like when that women offered the recipe for Coca-Cola to Pepsi. Actually, that story was more of security breach — these blueprints weren’t even stolen…

Look, it doesn’t take a rocket scientist to determine how a building is constructed — what, are the going to drape the entire project, right downtown, in thick black canvas and a sign that reads, “For National Security’s Sake, Please don’t Peak Behind the Curtain?”

Will they go so far as to do background checks on every single contractor working on the project and give them security clearance to work on the project?

They obviously didn’t go that far building the new Yankee Stadium, another high profile site, and that one could arguably be considered an equally “guarded” NYC construction project.