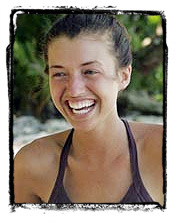 A guilty pleasure of mine is the television program Survivor.

This season I think I may have missed one episode — and it only snuck by me because of some wacky scheduling on CBS because of March Madness College Basketball.

Last night was the finale where they crowned the winner — Parvati outlasted Amanda to take the $1 million prize.

For those that aren’t familiar with the show, when the game gets down to the final two contestants, their peers (and former rival contestants) are permitted to directly ask them a question (or in some cases, just vent).

Based on the contestant’s answers, these eliminated players get to determine who wins the game. Usually it’s just a fluff/spite fest full of uncomfortable moments. If anything, the final episode of each season is usually the worst (not to mention the least climactic). It’s just not great television.

But on last night’s episode, one of the contestants, Eliza, really ripped into both of them by saying things that I think a lot of people feel, but rarely express.

For the record, Eliza was never a popular player (this was her second run on the show). She’s one of those people whose face can be read in an instant — she doesn’t seem to have the ability to be subtle, it’s all out there all the time. Not exactly a great character trait.

So when she gets her chance to speak to the remaining two players, she vocalizes her feelings. She calls Parvati a “mean person”. A person who very openly insulted her, put her down, talked behind her back, and was, in essence, downright rude for really no reason.

Essentially, this was the unpopular girl telling the popular girl, “You know what? You might think you’re so awesome, but you’re a real jerk. You hurt me, and I want you to know it.”

I know people like that. There was a guy in middle school, Rick, who would just walk right up to me and say out loud, “Why don’t you have any friends?” It was bizarre. I didn’t have a real answer, other than a befuddled, “What?” But he kept doing it. Day after day.

At the time, I just couldn’t figure it out… He sat at a lunch table of sports losers. You know, the guys that could recite the 1927 NY Yankees batting order or tell you how much Charles Barkley weighed on any given day. Real important stuff.

At the same time, these were also the guys who always wore sweatpants in gym class and never actually participated in any of the “sports” we were forced to play. To them, talking about sports was what mattered, not actually participating in them.

They threw like girls. The kicked with their toes. They couldn’t sink a foul shot.

In the grand hierarchy of social order in our school, I was easily 200 seats ahead of this guy. What was his problem?

Plain and simple, he was a prime example of a mean person. He carried it into high school even — at which point we were segregated and herded like cattle based on our academic, athletic, and artistic talents so thankfully we never really crossed paths again.

Back to Survivor — for the second remaining contestant, Amanda, Eliza calls her really disingenuous. You know, the type that smiles at you, moves in for a hug, and says something like “Oh, it’s so great to see you!” with a slightly ‘off’ tone of voice.

There’s being polite, and then there’s going over the top, and that’s called insincere. Amanda was the type that would turn on the tears to get a reaction. She’d bat her eyelashes and frown. On a genuine person, both would be very meaningful expressions, but on her, it was so openly fabricated. And Eliza called her on it.

Relating, again, to my own experiences, I can’t stand when kids say “thank you” like robots. You know what, if you don’t mean it, don’t bother saying it. I’ll be a lot less offended — and I don’t think I’m alone.

Even better, most cashiers these days… I know that they have a “script” to stick to, but please, don’t bother saying “Have a nice day” if you’re going to say it like you really couldn’t give a crap how the remainder of my day goes. Just don’t bother.

Perhaps it’s just me, but I find it more polite to say nothing rather than saying something I don’t actually feel. A slight smile will do. No, not a smirk. A smile. Thanks. Oh yeah, no eye rolling either…

In the end, it was Eliza’s vote that determined the winner of this season. I’m sure the show was edited heavily to make it look like Eliza debated longer and harder than she actually did on whom to award with the million dollar prize — the mean girl or the phony girl — but in the end, she chose Parvati (the mean one) to be the winner.

In the same situation, I think I would have done the same. Rick, from my middle school days, certainly wasn’t fake. He was just a mean-spirited loser. Sad that someone like that could be rewarded for it. Society… ugh.

That’s the part that sucks about many of these reality elimination shows… When you get right down to the end, you’re left with two people who don’t really deserve it. Erik and Cirie should have been the final two, at least I like to think so, but between them, there wasn’t enough meanness or fakeness to get it done… Hey, even Eliza would have been more deserving…