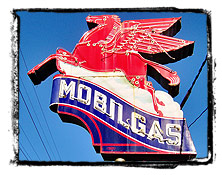 Media reports preached that breaking the $3 mark would change the driving habits of Americans.

I didn’t see any difference.

So, today, we officially hit the $4 mark in Connecticut.

I’m not complaining though.

When they’re not covering the typhoon in Myanmar or the earthquake in China, the news reports have been exactly the same as they were a year ago with catchy titles like “Pain at the Pump”.

I wouldn’t be shocked if they’re just recycling old archived stories — they could, few would notice.

…even with the price rising, it’s not affecting my budget at all. It’d have to raise at least another $2/gallon before I’d even have to reconsider my driving habits…

So, you can see, the upswing in the price of gas isn’t as significant as they make it out to be on the news — at least for those of us who don’t drive for a living.

A four dollar per week increase shouldn’t cripple your finances — I wish these folks they interview on the news could see the actual difference. For those smokers out there, that’s far less than a package of cigarettes. Think about that for a second…

I understand that the price of gas causes the price of food to go up as well (along with countless other consumables), but really, we’re talking very small amounts in the grand scheme of things.

So, again, I’m still not anywhere near the point that I’m about to change my driving habits. In fact, we’re planning a cross country driving vacation right now.

And I’m not even sure I still agree with my guesstimate of $5.19 per gallon being my limit. Hey, if the daily doomsday predictions in the media are correct and on target, we’ll see that price by Labor Day.

I’m not happy about it, but I’m also not about to cry poverty over it either.