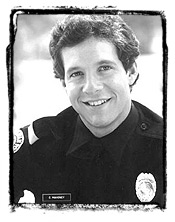 I work several floors up in a boring rectangular office building. I keep my windows open a crack, partly for fresh air, but also because I like the white noise of the traffic going by.

This morning I heard a police car do that quick siren thing (like in the “Click-it or Ticket” commercials), so I looked out the window and a police officer had just pulled over a vehicle right beneath me.

Mid-thirties woman, obviously on her way to work based on how she was dressed. Not to profile or anything, but she didn’t fit the description of a thug at all.

If I had to guess, it was either speeding or running a red light — neither of which I personally take lightly — that resulted in her being pulled over.

So the police car is right behind her — I can see in the officer’s car through the windshield that he’s punching something up on his laptop — probably the car’s registration or something. No biggie.

Then a bicycle officer pulls up to his passenger window. (I won’t even go into the fact that the bicycle officer was riding on the sidewalk.) The officer in the car rolls down his window and they start talking.

Still, no biggie, the original officer called for backup or whatever. Perhaps it’s for legal purposes, but I think it has more to do with them liking to make a big scene out of nothing. Still, at this point, I’m thinking things look pretty regular.

I sit back down and start working again…

Then I hear laughing. I stand back up and poke my head out the window. I’m low enough to hear the entire conversation when pressed against the window screen. The two officers are shooting the breeze… about, get this, AMERICAN IDOL!?

Now this wasn’t a short conversation…

The woman was sitting patiently in her car. Actually, she was starting to get fidgety. Can’t really blame her — she was probably late for work at this point — and wondering what was taking so long.

It was obnoxiously rude of the officers.

I mean, if I could hear the conversation a few stories up, she could definitely hear it as well.

In her shoes, I’m not sure what I would have done. Is it right to honk the horn? Flash your brake lights? Get out of the car and approach the officers?

They’d probably shoot you. At the very least, they’d arrest you on some bogus charge of interfering with an officer. A disorderly conduct charge would also be thrown in for good measure.

At the conclusion of the jovial conversation laden with expletives, the officers agreed that David Cook should win tonight on American Idol. “That guy rocks.”

At 8:13, the officer’s car door *finally* opened and he approached the woman’s driver side window. They spoke for two minutes.

The officer then walked back to his vehicle and spent another 12 minutes in his car writing up the ticket while discussing the Red Sox no-hitter last night with the bicycle officer?! Unreal.

The bicycle officer then rode the ticket up to the woman and then pulled in front of her car to make a u-turn across traffic (yes, on a bicycle), which at this point, due to the time and a squad car with its lights flashing, was pretty heavy. He even put his arm out as if to indicate he had the right of way. Um, yeah.

She finally pulled away at 8:27. That’s 32 minutes after she was pulled over.

Now, I’m not one to say the police are corrupt, or evil, or out to get everyone — not for a second — but I will say, it’s things like this that lead the public to lose faith in the system.

The public believes what they see and what I saw today didn’t shed a very positive light on the city police department. It was very unprofessional. They showed absolutely no respect to this woman. None. Frankly, I found it disgusting.

Sadly, you can’t really call them on it though, unless, of course, you’re willing to take an “interfering with an officer” charge for the team…

Where are officer Carey Mahoney and McGruff the CrimeDog when you need them?

Is T. Boone Pickens the next Ross Perot?