So the el-cheapo weekend plans didn’t work out entirely as planned.

The car show on Saturday that I’d been looking forward to was postponed due to weather, which is too bad, because the weather never really materialized.

Anyway, as a result of the postponement, we spent most of the day on Saturday at home. I made reservations for another 3 days worth of our vacation coming up later this month so that’s a good thing, but hardly “free” entertainment.

Sunday, though, the weather was nice. We headed out for a drive in the BMW with the top down. Sure, we’re burning gas, but it still feels like free entertainment and it’s a great way to work on my forehead tan. 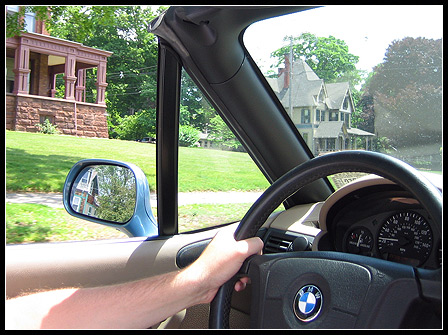 In total, we put just over 100 miles on the car this morning just taking the scenic route on our way too and from a flea market!

Admission to the flea market was $2 each. A pretty good bargain for a nice sunny day. 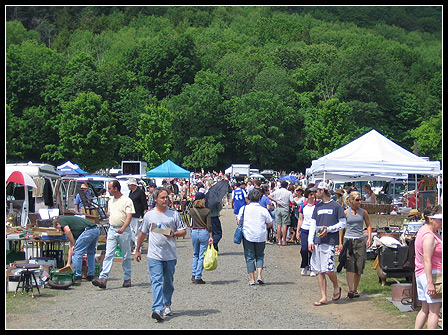 We hit this particular flea market three or four times each summer, and we’ve probably been going to it for at least four years, but I can’t say we have ever bought anything.

I’m almost embarrassed to admit, I’ve never haggled for anything in my life — it’s just not my style — but so few of the vendors have prices on anything… It’s like they want you to haggle.

Luckily, most of the stuff they’re peddling is just total crap anyway, so it’s not like I’m missing out on much anyway.

Really, who wants a rusty shovel blade? Seriously. Some of the junk they lay out on card tables and tarps is really un-fit for sale.

On vendor’s wares did catch our eye though. They were selling birdhouses. Yeah, I know, who needs a birdhouse? But these were really nice in an artsy-fartsy kinda way. 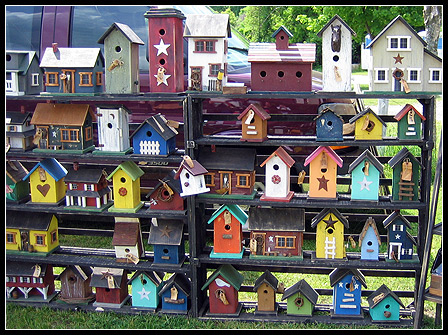 We didn’t end up buying one — keeping our streak of not buying *anything* alive — but had they had one that looked like our house, I probably would have purchased one.

Though, had I bought one, I probably would have kept it inside — they were too nice to leave outside to rot. But then, inside, what’s the point of a birdhouse?

Thinking about it that way, I’m glad we left empty handed.

Argh!? Seems I Spoke too Soon…