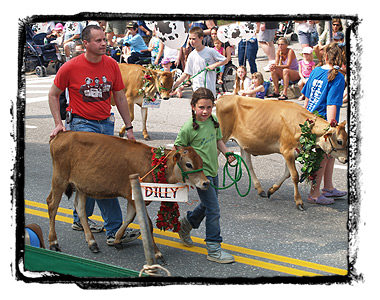 Well, it looks like the weather is going to cooperate for us this weekend so we’re up early and preparing to head up to Vermont for the seventh annual Cow Parade.

I’ve gotta stop calling it that.

My mother-in-law (who I’ll be seeing today) would prefer if I call it by its proper name, the “Strolling of the Heifers“.

C’mon, no matter how you slice it, calling it by either name can get some rather odd reactions — especially if a couple of rather large women happen to be within earshot.

It’s best to whisper the name in public — outside of Vermont at the very least.

I mean, really, do they parade real live cows up Main Street anywhere else in North America?

Yeah, yeah, I make fun of it now, but I must admit — the past three years we’ve attended, I’ve had a good time. I may even buy a Mardi Gras style cow mask this year from one of the bizarre hippie street vendors.

Then, if we’re quick, we’ll be able to hit the car show that was postponed last weekend.