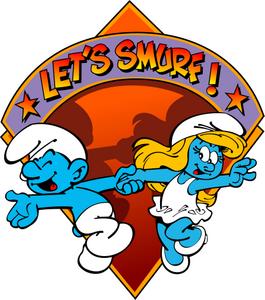 On a personal note, I just stumbled across this encouraging bit of news this afternoon on Variety‘s website:

Columbia Pictures and Sony Pictures Animation are bringing a live-action/animated “Smurfs” project to the bigscreen.
Sony obtained film rights to the blue-colored characters from Lafig Belgium via Jordan Kerner (“Charlotte’s Web”), who is producing. David Stem and David Weiss, who wrote the second and third installments in the “Shrek” franchise, are in negotiations to pen the screenplay.

Kerner secured film rights to the Smurfs property in 2002 and had been developing a 3-D CGI feature at Paramount/Nickelodeon, which has an option to co-finance the Columbia/SPA incarnation and distribute internationally. The Melrose studio has yet to make a decision on its role in the film.

Best known in the United States for the long-running Hanna-Barbera cartoon, the Smurfs were created in 1958 by Belgian cartoonist Pierre Culliford, known throughout the world as Peyo. The Smurfs, originally called “Les Schtroumpfs” in French, were created for a Belgian series of comic books, first as minor characters. The villagers, known for their blue skin and small statures, spawned a line of statuettes, games, toys, theme parks and a hit TV series, which ran as part of NBC’s Saturday-morning lineup from 1981-90.

Kerner said the genesis of the current project began during a holiday conversation with Sony Pictures Entertainment chairman-CEO Michael Lynton, who grew up with “Les Schtroumpfs” in the Netherlands. “He relished them as I do and suggested that it should be a live-action/CG film,” he said. “(Studio topper) Amy (Pascal) felt equally that there was potentially a series of films in the making.”

Kerner has been working closely on the project with Lafig CEO Hendrik Coysman and Veronique Culliford, the daughter of Peyo.

“Smurfs” marks SPA’s first hybrid film — a subgenre that proved popular given the success of 20th Century Fox’s “Alvin and the Chipmunks” — and is the first project to go into development since Hannah Minghella was named prexy of production for the division in April. SPE digital production prexy Bob Osher said the studio plans to rely on Imageworks — which was recently taken off the sale block — for the film’s character animation and visual effects.

“The Smurfs are one of the best-known franchises, and among the most beloved collection of characters in the world,” Columbia co-president Doug Belgrad said. “We’re very excited to introduce a new generation to Papa Smurf, Smurfette and the other smurftastic Smurfs in all of their ‘three-apple-tall’ glory.”

Sony will launch a licensing effort around the classic Smurfs characters at this year’s Licensing Show beginning today in New York.

Ben Haber will oversee the development of the script for Kerner Entertainment. Haber and Paul Neesan are exec producing the film.

Sadly, no mention of Brainy Smurf. Perhaps he’s too busy working on a PF Blog to be in the film… Perhaps…

On a slight tangent, in the late 1990’s I received a cease and desist order from the Peyo folks in Belgium. They meant business — the shipping charge on the envelope was over $80.

They weren’t very friendly either — they smurfed me up and down. The threat was, as I’d grown accustomed to at that time, trademark infringement.

Unlike my first run-in of this type, I didn’t stand my ground and sold my soul to Gargamel.

They’ve left me alone ever since. I semi-regret it now.

Anyway, I wonder if they’ll tone down the socialist tone for the movie? I should hope not, but I can’t imagine it staying true to form.

They’ll smurf it up somehow… And, yes, the verb form of “smurf” in that connotation means exactly what you’re thinking…