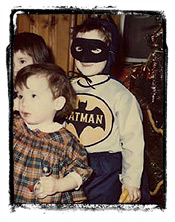 Batman this, Batman that…

Where’d all of this hype come from? Who’s responsible? And how many times can they make the same movie over again and still generate this much hype?

I don’t understand it.

I can’t claim to have seen the latest movie or even the previous 3 Batman movies.

That one with Danny DeVito as the Penguin sealed it for me — Batman movies from there on out would a complete waste of time.

The original Batman television series from the 1960’s was easily the best. Even the 1966 full length movie ranks right up there, even though it just felt like a really long episode.

Adam West was the best Batman ever. No doubt in my mind. He made the character fun.

“Some days you just can’t get rid of a bomb.“

I remember when the first (but actually the second) Batman movie came out in 1989. You know, the one with Kim Basinger?

I was pretty excited (there was HUGE hype then too!), but then disappointed to see the, well, new and supposedly improved Batman. First off, his Batmobile sucked.

And since when did Batman wear all black?

Where did those washboard abs come from?

Why wasn’t anything labeled in the Batcave?

And really, who decided that Batman should now where more eyeliner than a crack whore? Tim Burton?

And, lastly, was it just me or was it hard not to just keep seeing Mr. Mom or Beetlejuice in that movie?

In the end, I thought Michael Keaton was an alright Batman. A terrible Bruce Wayne though. Jack Nicholson was also a decent Joker. Not as great as Cesar Romero, but still, pretty good.

Remember when movie hype actually lasted for almost and entire summer? I’m thinking about movies like Independence Day, Terminator 2, and even Ghostbusters…

Every fast food restaurant had some sort of collectible glass available, I mean, the movie was a big deal. There were arcade games that were actually good — not just commercials for the movie. They even made action figures that people actually wanted. I don’t know — it was like they actually put some effort into marketing the movie.

Now though, as much as they’ve been making of this Dark Knight movie lately, in another week, it’ll be old news. No one will care.

Some Martin Lawrence in drag movie will come along and knock it off the top and the poor Dark Knight will be forgotten, the action figures will be in dollar stores across the country, the related video game will be in the bargain bin at BestBuy, and Heath Ledger will go back to just being that guy from the gay cowboy movie that OD’ed or something.

Anyone remember that Indiana Jones movie that came out earlier this summer with much fanfare?

Yeah, I didn’t think so…

Of course, this is all just my opinion.

I could be wrong.