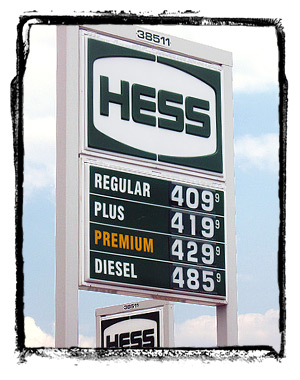 Remember when it was routine to be asked, “Cash or charge?”

I’m too young to have ever been asked that question. Or so I thought…

Around a month ago, a Hess station not too far from my house went retro. They started asking that question again because they started selling gas for two different prices. Paying cash got you a 10-cent/gallon discount.

Within 24 hours, it was like 1979 again with lines of cars waiting patiently (or not so patiently) to fill up.

But just at that Hess station.

Down the street, the Exxon station was all but empty. Same thing at Shell. Valero too.

It was about this time that the Attorney General stepped in saying that it was illegal for Hess to be charging customers more for using credit.

In response, Hess argued that they weren’t charging more for those using credit. Rather, they were discounting the price for customers paying cash.

Wow, how’d the lawmakers miss THAT loop hole? Apparently, they did…

So, a few weeks ago on my way home from work, I had to fill up. The Hess station closest to my house is right next door to a Citgo — they practically share a parking lot — but they had a difference of 15-cents for the price of a gallon.

As I’ve said before, I’m not one to price-shop for gas. I’ll go where ever is the most convenient, but as these two stations are right next door to one another, well, I pulled up to the pump at Hess.

I unscrewed my gas cap, turned around to face the pump, dug out my wallet and only then remembered that I don’t usually carry cash. Oh well, I thought, I’ll just charge it.

Then I saw the handwritten note on the pumps, “Prices are for cash only. Sorry, no debit or credit.”

I pulled through and filled up at Citgo. On credit. Using pay-at-the-pump.

The next time I had to fill up I bypassed Hess and went straight to Citgo. Their price was now competitive with the Hess next door but guess what?

They’d taped over their card readers too. “Cash only.”

So I come to find out that it’s a technology issue.

Modern gas pumps aren’t able to dispense the same product for two different prices. In addition, most gas station signs aren’t large enough to display two prices (or technically, 8 prices for all of the different octane levels and diesel) like they used to be, so now some gas stations are just going “all cash”.

Thankfully, this issue only seems to become a problem near select Hess stations, but now that one Citgo has followed suit, the other Citgo across town is probably growing jealous. How long before they do the same thing?

Am I going to have to start carrying cash?

As I think I’ve said before here on PIAC, I’ve only paid cash for gas once in my life. Once. And that was also the only time I’ve ever been inside a gas station after filling up.

No, I’m not that young, but I was fortunate to have grown up in a town where Mobil test marketed “Pay-at-the-Pump” and even a very early version of the SpeedPass. With my mother’s credit card in hand, it was often my job to fill up the family minivan. I never had to venture inside. Not once.

But now, well, I just might be forced to fall victim to all of that eye catching cigarette advertising inside!!! Oh my!

But really, I guess what upsets me the most about a two-tier price structure is that it’s going to make the average (ignorant) consumer think that MasterCard and VISA are to blame for high gas prices and, well, that couldn’t be farther from the truth…

Finally… A Good Weekend (and Reason) to be a BoA Customer