CLOSE
Home Finance Credit Card To Borrow, or not to Borrow… 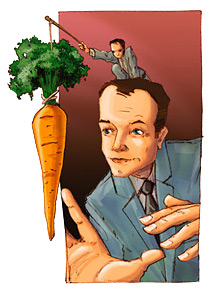 The idea of taking advantage of the 0% offer Chase is dangling at my nose is really getting to me.

I’ve put together all kinds of charts plotting out how much I’d save if I did this or if I did that.

Eh, let’s borrow an extra $4k and just wipe out the car loan at the same time. That’s the most recent variation.

Grant over at Clever Dude recently took the bait offered him by Citibank.

I’d have probably taken that deal too — even if it isn’t for a full 12 months.

Logging into my own Citi account, my offer isn’t really comparable. Not only do I have a lower credit limit on that card, but my fee isn’t capped… at all.

A little over a year ago now, I did the arbitrage thing and I didn’t get burned.

But it didn’t work out exactly as planned either. I didn’t exploit the fact that I’d borrowed money at 0% by earning a nice (at the time 4-plus percent) rate of return in some savings account.

I’d planned to do that, I just didn’t.

Instead, I ended up using most of it to finance home improvement projects.

It wasn’t a complete backfire, but not really a success either. Yeah, I saved a little money, but I certainly didn’t make any.

Clever Dude had the same problem last time he tried to pull off one of these arbitrage moves. He ended up paying off a car instead and, well, probably saved some money but didn’t actually make any.

He’s in a different position now — he CAN make money because he doesn’t have funds tabbed for anything. Yeah, he still has an auto loan but, well, you can read his entire post…

As for me, I’m not there yet. I’ve still got a car loan at 5.35% and the ever-annoying PMI issue to deal with.

To eliminate both of those, I’d have to take up my 0% offer for at least $6k.

Borrowing that little, my 3% transaction fee would be $180 — doesn’t even hit the $199 cap. To me, that means I should borrow more, you know, to at least take some advantage of the cap…

But at the same time, I’ve started to grow accustomed to not carrying any credit card debt. Do I really want to dig myself into that hole again?

Sure, if I borrowed, say $10k, I’d send $2k to the mortgage, $4k to Toyota, and then put the remaining $4k in my ING account to accrue interest.

At the current rate, that $4k in savings would “earn” me around $120. That doesn’t even cover the transaction fee.

And is a “free” $120 worth going back to carrying a credit card balance for another year? Not to me…

And technically, factoring the $60 or so of interest saved by paying off the car, it really works out to a complete wash…

Higher Education: One and Done