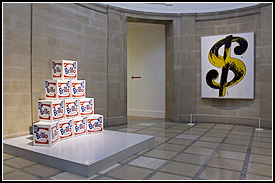 “What’s great about this country is that America started the tradition where the richest consumers buy essentially the same things as the poorest. You can be watching TV and see Coca Cola, and you know that the President drinks Coca Cola, Liz Taylor drinks Coca Cola, and just think, you can drink Coca Cola, too. A Coke is a Coke and no amount of money can get you a better Coke than the one the bum on the corner is drinking. All the Cokes are the same and all the Cokes are good. Liz Taylor knows it, the President knows it, the bum knows it, and you know it.”

I never really “got” his artwork.

And his personality? I dunno, maybe it’s just me, but he was a weirdo.

Weirder, even, than that horrible Perez Hilton guy that commands so much media attention.

But there’s a lot that can be said about that quote. I mean, one could say that’s the reason a Ron Paul presidency would never work but I’m not going to go there…

I’m going to go back to a few experiences I had while on vacation.

One was that we were very disappointed at how many establishments in the mid-west served Pepsi. I mean, sorry, that’s just wrong. Pepsi tastes like bug spray — how anyone could prefer it is beyond me. So I’m siding with Andy Warhol on that one… Coke is it!

But really, in each of the hotels we stayed in, as we’d depart, we’d pilfer, plunder, and pillage the free loot in the bathroom. You know, soap, moisturizer, mouthwash, shampoo, conditioner, and if we were really lucky, even a shoe horn… C’mon, everyone does it.

Basically, anything that we hadn’t opened during our stay was coming with us.

So, since we’ve arrived home, we’ve been using all sorts of miniature soaps in the shower. Like a Coke, a bar of soap is just a bar of soap, right?

Well… this is where the story takes a turn…

Usually at home, we use Dial.

And I recall seeing a bar of Dove in the not too distant past, as well.

I can’t really say that I favor one over the other, I mean, soap *is* soap.

All three brands make me feel like I need to sneeze when I walk anywhere near the bathroom.

All three get really mooshy overnight sitting in the shower and disintegrate to create a lively soap scum display on the wall — not Warhol-esque. It has more of a Jackson Pollack feel to it.

Further, when I’m washing my face, sometimes I feel like I’ve just inhaled too close to a powdered donut. I’m sure you know the feeling. Happens all the time with Dove. Do they make it out of baby powder or something?

But this past week, while using a trial soap from one of the hotels, I noticed that the soap wasn’t mooshy on day two.

It smelled kinda nice — not like confectioners sugar — but more like a really muted cucumber smell. Odd, for me to think that, because I don’t even like cucumbers.

And best of all, after I rinsed off, I felt squeaky clean. More so than I do with any of our regular soaps. Even a little tingly. The floor wasn’t even slippery.

What kind of soap was this?

I asked my wife…

Thankfully, she remembered the label (or the imprint before I scrubbed it smooth): June Jacobs.

I declared that starting today this would be our new daily soap of choice and proceeded to finish off the bar.

Hopping online, we found the soap. Yep, that’s the one. We were very excited.

Where does June Jacobs get off charging $18 for one bar of soap?

Someday, though, I hope to use June Jacobs on a regular basis, but obviously today is not that day…