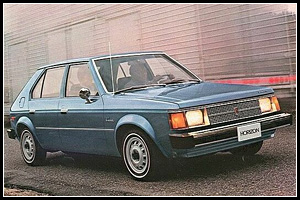 So we are looking for a car.

We lost the Sable when a deer slammed into it.

That left us two vehicles — our intrepid 1995 Taurus and our diligent and appropriately appointed 1991 Volkswagen Fox.

As you can see, we do not buy new cars here.

Although, that was not always the case.

Early in our married life together, when the future looked bright in every way, Mary and I bought two new cars back to back.

The first was stingy on gas and practical — a Plymouth Horizon. You remember, Plymouth’s answer to the VW Rabbit. The car was ice blue, with cloth seats and got over 30 miles to the gallon around town and better on the highway. And Mary and I took good care of that car.

Until the car was rear-ended as she waited to enter I-91.

Then, we bought our navy blue Taurus wagon. If we could have, we would still be driving it. But the car bottomed out at 216,000 miles. Who says American cars can’t break 200,000? At the end, the car could not make it up Kelly’s Hill, and we let it go.

Since then, it has been a menagerie of cars, mostly Volvo wagons with over 200,000 miles on them, and Tauruses with over 150,000. The kids, who were so young once, do not quite remember the salad days when we drove new cars. They pine for something that looks good and runs well.

And this, I confess, makes me a bad father because I continue to settle on these old clunkers with no car payments and short lives. At least, they are safe, but even now I worry because the Fox does not have airbags.

So we are looking for a car.

This is how I go about it.

I get on the internet and check craigslist. You can find anything on craigslist, especially, cars, car parts, whatever might have once resembled a car to an actual fine car with a pedigree like a Benz or Lexus.

When I find cars, I email the link to my kids for their approval.

For instance, I found an Escort in Southington, whose owner was just tired of the car and wanted to get rid of it for $500. Bingo.

The list goes on, but you get the point.

From there, we looked at cars in Manchester, Norwich, and Norwalk.

I found a Saab in Manchester, N.H., that looked good and added it to the list.

“Dad, what are you doing?” one kid asked me. “I called for that Saab. It’s in New Hampshire. The guy who answered the phone told me I was crazy to drive all that way for an $800 car.”

“Come on,” I said, “it would be fun. We’ll drive up, spend time with Uncle Harold, and check out the car.”

Of course, I have no idea what registering an out of state car would be like, and would I really like to be driving back and forth to complete the paperwork.

And it would fit our budget.

I feel somewhat guilty about that.

I mean how good can a car that’s going for that paltry sum really be?

I’m going to be sending my kids out in one of these. Am I crazy?

“Dad,” I heard from one of the 20-somethings, “you know I’m not materialistic, having grown up in this household, but I do think aesthetics are important.”

Just to make sure I knew what was being addressed I looked up the definition: Webster’s Seventh New Collegiate Dictionary states: “1. a branch of philosophy dealing with the nature of the beautiful and with judgments concerning beauty 2. the description and explanation of artistic phenomena and aesthetic experience by means of other sciences.”

It was two days later when I responded, “I’ve been thinking about what you said about aesthetics. I’ll tell you what aesthetics is. Aesthetics is getting from point A to point B with good gas mileage and safely.”

At least I know all the money we’re spending on college and not on cars, isn’t going to waste.

This was a freelance column in the local weekly in town. You know, the page in the middle that’s geared towards the blue-hairs out there.

I wouldn’t be shocked to learn that I’m lone reader in the 18-35 age demographic for the entire newspaper, actually, not just the middle page. Yes, the type is even larger on this page. I’m not kidding.

Anyway, I just though it was a neat story and, to a certain degree, something that I wish I could do.

Just think — a $500 car would only have to last around 60 days before you’d be saving substantial money by driving it. Best of all, you could theoretically have a “new” car every few months. That’d be pretty neat.

My only hurdle is the fact that I don’t really know anything about servicing a car. I mean, I can change a tire and even top-up the washer fluid (though I’ve only done that once), but that’s where I draw the line.

So, obviously, I’m not a great candidate for driving a clunker on its last legs.