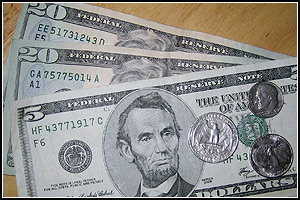 This past Sunday morning, my wife and I loaded up the back of her truck with all of our empty soda cans and bottles and headed to the closest grocery store to get a jump on the crowds. It was 7:30 am.

To our dismay, we weren’t the only ones looking to beat the crowds. An elderly man was in there. He didn’t have any returnables but he was “guarding” one of the can machines. That’s okay — there are two more machines that accept cans.

She then decided to start feeding the plastic bottle machines. Those weren’t taking any more either. Ugh. She went inside the grocery store to summon some help.

I kept on plugging away at my can machine.

Out of the corner of my eye, I could see the old guy grabbing cans from my wife’s carriage and feeding them into the machine he was “guarding” when we arrived. I looked over, smiled, then said thanks thinking he was just one of those old friendly guys helping out a nice young lady — my wife.

Then he hit the “Receipt” button and walked out. Um…

Okay, so he stole, like, 80 cents from us. Whatever, he probably needs it more than we do. I wasn’t going to chase him. Still, the nerve of some people!

So my wife returns with a very unfriendly employee who disappears behind a locked door to “fix” the can and bottle machines.

My wife says to me, regarding the can machine that she was feeding before she went inside to get help, “Hey, did you cash out this machine?”

Well, it didn’t take a rocket scientist to figure out who cashed it out…

He was still milling about the parking lot. We shrugged our shoulders, both agreeing that it wasn’t worth making a scene over, and proceeded to stick can after can into the machines.

Finally, we were left with nothing but plastic bottles. Well, the grocery store employee failed to “fix” those machines.

Good help is so hard to find.

While my wife went back inside the grocery story to claim our loot from the courtesy desk (if you’re unfamiliar with the can machines, they print out voucher receipt things), I started to consolidate all of the plastic bottles that we apparently weren’t going to be able to return today into one cart to make it easier to take back to the truck.

The old guy comes in again.

Apparently, he’s now under the impression that I’m giving HIM the bottles. Not sure where he got that idea.

I’m doing my best to use my body to shield the bottles from his grasp.

He was a little slow, not physically — if you catch my drift, and had some prepared story about donating them to the Boy Scouts or something.

That was probably true, I recall something about the Cub Scouts doing a can and bottle drive, but he’d already “taken” a donation from us earlier. These bottles were mine.

“No, we’re keeping these bottles because the machines aren’t working, thanks…” 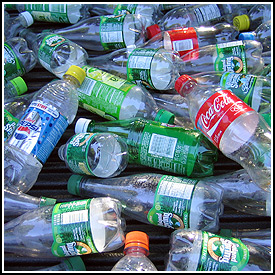 I wheeled the cart out to the truck and started tossing them into the bed of the truck back. Then I stood guard.

How ridiculous is that? He came out to the truck with his Boy Scout story again. Unbelievable.

“Yeah, no thanks. We’re keeping these bottles.”

Then he walked away, finally, and got into his beat up Ford Taurus station wagon and sloooooooowwwwwly drove away.

At this point, I concluded that he wasn’t collecting stuff for the Boy Scouts. He was collecting them for himself.

His speech was super slow, a little slurred, and he sported a trace of a Polish accent, but like I said, he seemed a little slow. He didn’t appear to be a drunk.

He was far too well put together to be a homeless guy collecting cans. Didn’t smell. His clothes weren’t anything unusual for a guy of his age. Besides, homeless guys are smarter than to hit up can redemption centers at 7:30 am on a Sunday.

My wife finally comes out of the grocery store with cash in hand. In less than an hour, we’d returned 908 cans for $45.40.

Had the plastic bottle machines been up and running, we’d have easily cleared $50.

Not bad for a Sunday morning…

Oh, and yes, I realize that the title of this post can be interpreted several different ways…but get your mind out of the gutter…