CLOSE
Home Finance 401k Roth IRA or Traditional IRA? How about neither? 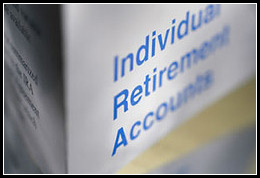 Hmmmmm… Which to choose… I’m not really sure. I’ve researched the advantages and disadvantages of both and it’s just left me more confused than I was at the start.

It seems most folks my age (32) lean heavily towards the Roth IRA because it’s taxed now and not in the future when you expect to be in a higher tax bracket.

But unlike most folks my age, I’m a little bit more realistic when it comes to my earning potential and what tax bracket I’ll fall in to fifteen to twenty years down the road. I’m not optimistic.

When nearing retirement, though taxes will most likely have gone up, I actually expect to be in a lower tax bracket than I am now so that “advantage” of the Roth is totally lost on me. The Traditional IRA wins out.

On the other hand, with a Roth IRA, you can make withdrawals all along without penalty. No waiting until turing 59 and a half. If I need another $5k to build my dream garage or something, I can grab it from my Roth IRA and not get hit with a bunch of fees, penalties, and/or taxes. In that respect, the Roth IRA is clearly better.

By the end of this year, I’ll easily have enough to fully fund one or the other. Obviously I’m still having a hard time deciding which is the wiser course of action.

Further, I still struggle to come to terms with the idea that being limited to $5k per year will add up very quickly or keep me interested.

I realized that the limit is increased slightly every few years, but even still — what takes me just three years of contributing to my 401k will take over a decade with either type of IRA.

It just seems…slow? It is slow.

The advantages, from my perspective, don’t outweigh the limitations — specifically, the low contribution limits.

It seems like they’re little more than a way to supplement your savings — being limited to such a small contribution, it’s certainly not jump starting anything. It can’t.

But maybe I’m *still* missing something…