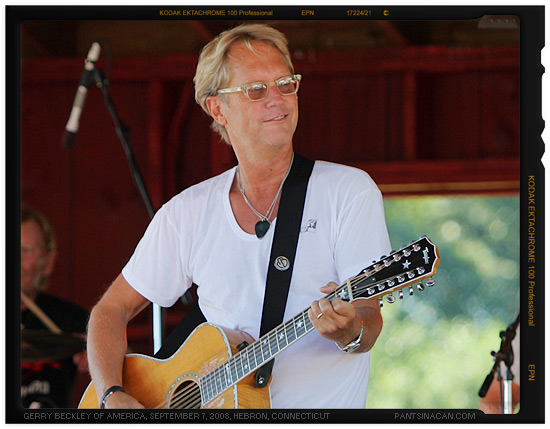 This is photo I took today of Gerry Beckley from the rock band America.

We saw them today at the Hebron Harvest Fair for $10. Yes, that’s two dollars less than it cost us to see Smash Mouth last week.

For the younger set that may have never heard of the band America, well, guess what? They’ve been ripped off by Janet Jackson, used in the video game Grand Theft Auto, and in a recent Vera Wang commercial for Kohl’s.

Guaranteed, you’ve heard their stuff — you probably just didn’t realize it. And no, it doesn’t suck.

I mean, who resorts to a “wardrobe malfunction” to generate press?  Who does that?  Seriously…  That’s bush league…

Anyway, America’s show was much, much, much better than that of Smash Mouth last week, even being a member short — founding member Dewey Bunnell wasn’t on stage due to a “medical problem”.

No worries for me though, my favorites by the group are all sung by Gerry Beckley and he was great.

Being that I’m not really old enough to have heard their original hits when they first came out, my personal favorite is from the 1980’s.

Watch the video. I mean, it doesn’t get any cheesier than that. It just doesn’t.  Five guys facing forward with silly smiles on their faces.   Cheezy but great at the same time.

Remember when all videos were like that? I do.

Surprisingly, they opened the show with one of their bigger hits, “Ventura Highway“.

At first, I was a little worried that that might mean they’d fill the next half hour with a bunch of new stuff that I wasn’t really interested in, you know, “Here’s a cut from our upcoming album…”, but they didn’t disappoint.

I’m not much more than a casual fan, but they only played one or two songs that I hadn’t heard before. They had that many hits.

Sure, these days the only place you’ll hear them in their entirety (and not just a few bars sampled by some talentless rapper) is at the dentist’s office or in line at the grocery store, but there aren’t too many bands that can play for well over an hour and fill the time with songs even the casual fan knows the words to.

They closed the night with “Horse with No Name” which, unfortunately, was only so-so because Dewey Bunnell usually sings lead on that one. As I said earlier, he wasn’t there.

The high point that really got the crowd going was an extended version of “Sister Golden Hair“. It’s another of their big hits and Gerry Beckley (the guy pictured above) was full of energy and sounded exactly like he did on the original recording some 33 years ago.

Up next for us is the Guess Who in a couple of weeks. I’m not feeling real great about that show — I’m pretty sure the only real members touring with them right now are the drummer and the bassist. Neither one sang their hits.

That’s the case with a lot of bands from the 60’s or 70’s (even the 80’s and 90’s really). You know, you run the risk of seeing a band full of a bunch of replacement members touring under the name of a popular band. A great example is Journey. I’m sorry, but without Steve Perry singing lead, you can’t call yourself Journey. But they do.

America, to a degree, is no different in that respect. But the two lead vocalists are still around and the drummer and guitarist we saw today are the same two guys in that “You Can Do Magic” video from 1982…

Not much of a rotating line-up, which is probably why they still put on a pretty good show.