CLOSE
Home Life Man, You Can’t Even Build a Fort in the Car Anymore… 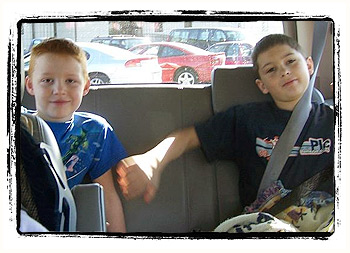 Just read this in the paper this morning — front page news, actually, in the local daily.

I hate stories like this. Sometimes, it makes me wonder how long my own personal rap sheet will be when I have kids.

Now, because I don’t want to draw any more attention to this poor man, I’ve blanked out most of his name. I don’t know, to protect, well, the innocent, in my opinion…

A Milwaukee man turned himself into police last week after he allegedly left his two young children under a blanket unattended playing a video game in a rental car outside a supermarket last month.

Scott K—–e, 41, was charged with risk of injury and leaving a child unsupervised in public. He made his initial court appearance Friday.

A police spokesman said the boys, aged 7 and 5, were unharmed and their father meant no harm when he tossed a blanket over them so they could play a video game while he went inside a grocery store to buy them drinks.

“He certainly wasn’t trying to smother his kids,” the officer said.

“It was irresponsible on his part, because the children could have been abducted or have had some kind of medical emergency.” .

The man was in town visiting when he took the boys with him to the store. They were playing a video game in the back of the man’s rental car and complained of the sun’s glare on the screen.

K—–e covered them in a blanket so they could play, but while he was in the store, a passer-by saw the children and called police.

When police arrived, K—–e and his children were gone, though police found him through his license plate.

A warrant was issued for his arrest but didn’t allow for extradition. Police said K—–e turned himself in at police headquarters last Thursday. He was released on a $2,500 non-surety bond.

A police spokesman said while K—–e’s actions were unintentional, the charges against him were deserved.

“You can’t leave your kids alone in a parking lot for a period of time,” according to police.

He also credited the witness for calling police after noticing the children in the back of the car.

“Without a doubt they were right to do that. They recognized a serious situation. The kids were being placed in some danger being left alone.”

Certainly not worthy of having your name splashed across the front of a newspaper.

That wasn’t the headline, but it may as well have been…

Sometimes I wish people would mind their own business.

Drives me crazy — especially when you *know* that their childhood was identical to what they’re seeing in the parking lot. Actually, it was probably worse.

Now I’m not saying parents should beat the crap out of their kids or leave newborns (or pets) in the car for long periods of time, but kids ages 5 and 7? C’mon…

I walked to school when I was 5. Should my parents have been arrested?

The police can say whatever they like, but I really hate when they make it out like there are potential kidnappers, crack heads, Muslim extremists, and pedophiles lurking on every corner.

Reading and hearing stuff like that makes me sometimes wonder if I should call the police every time I see a kid ride his or her bike past my house. Sometimes, gasp, they’re not even wearing helmets!!!! OMG!

And I should probably whip out my cell phone and call 911 each time I see children running through a sprinkler unattended. They could drown.

Really, it could happen.

But you know what? I’d never do that. Unless there is a real eminent threat, it’s none of my business.

I’ll keep an eye on it myself, like when you see a toddler wander off in the shoe department of Target or something, maybe try to steer them back to their parents, but to call the police? Please… that’s over-reacting.

I can’t tell you how many times my parents left me in the car when they’d run in to the grocery store to pick up a few things.

It was a win/win situation.

They could move faster in there without me and I really had no interest in going in either.

And back then, we didn’t even have video games or DVD players to occupy our time — I locked the doors and looked out the window. Sometimes I surfed on the hump on the floor between the two back seats.

Remember doing that? I’m sure you do — everyone did it. Even when the car was moving! Wheeee!

I was a world class car hump surfer by age 4. Hump of choice — a 1978 Chevy Malibu. Maybe it was a ’79? We could be on an unpaved road and, still, I could easily hang ten… It was awesome.

Nowadays, kids have to be strapped to a car seat until they’re over 55 inches tall. I’m not sure I was even that tall when I went into Junior High…

Now, besides locking the door and staying put, there was just one other rule for waiting in the car: Don’t touch the emergency brake.

Now, at the time, I didn’t know it was called the emergency break, but I did know that I wasn’t to touch that thing between the two front seats. I remember my dad telling me that it would cause the car to flip over — I believed him.

One time, stupidly, while my dad was in a long gone grocery store named Fitzgerald’s buying raspberry ginger ale or something, I pressed the button, and released the break.

The car did NOT flip over.

It didn’t. I can attest to that.

Emergency breaks do not make cars flip over.

But it did move. In a panic, I pulled it back up and the car stopped.

Thankfully, the car didn’t roll far enough to hit another car. It just rolled far enough to make it look like my dad had purposefully parked across multiple spots, like you often see, oddly enough, in parking lots these days.

Ever wonder why it always seems to be a pimped out Mitsubishi parked like that? Like they’re somehow worthy of taking up 4 parking spots? For heaven’s sake, it’s a Mitsubishi…

Sometimes I get the urge to park really close right next to them.

Anyway, yeah, sure, that could have been a dangerous situation. I learned from it.

So when I have kids, I probably won’t tell them that touching the emergency break will cause the car to flip over.

I’ll still tell them to never touch it — after I first let them release it in the driveway or something to scare the crap out of them.

Of course, the neighbors across the street will likely witness this and moments later I’ll be hauled off in handcuffs…

Mind your own business…

(and it’s odd to me that they can issue a warrant for something like this based on third party information, but they’ll do nothing when you call to report reckless driving that you see from the same car every single morning on your way to work… you know, something that actually is a threat to public safety…)