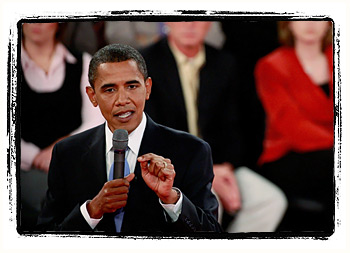 Watching the presidential debate last night, responding to a question regarding the current economic situation, Barack Obama mentioned something about businesses not being able to make payroll because they aren’t able to borrow money.

I don’t know, where I come from, if you need to borrow money to pay your employees, well, you’re not running a very successful business.

It’s as simple as that.

Even in a booming economy, a business like that certainly can’t be classified as profitable.

Earlier, on the nightly news, they highlighted a “small-business” owner in Florida. Apparently, due to the credit crunch, he’s having to close his 13 tile and carpet stores and lay off 40 employees.

Fair enough, but do you think he’d be fine if, say, he’d only opened 5 stores to begin with? You know, and operate within his means?

It doesn’t take a rocket scientist to figure it out. It’s just like the folks that bought more house than they can afford.

They gambled and lost.

Taking a risk or a leap of faith isn’t, well, it isn’t risk-free.

Hopefully the business owners out there who never overextended themselves will thrive in this “new” economy and find the fortune they’ve deserved all along.

And seriously, would it kill either candidate to actually answer a freakin’ question?

I was turned off by both…