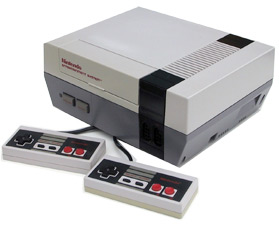 It’s funny how as you get older, parting with huge sums of money gets more and more difficult…

Just days into my plan of making car payments to myself, and feeling pretty good about it too, commenter Cath recently mentioned that, though she’s doing the same thing, she’d have a hard time parting with all of that saved up money in one shot…

I found the comment pretty intriguing and, after thinking about it some, I think I’m exactly the same type of person.

Let’s fast-forward 4-5 years and say that my “auto” savings account has grown to around $20k. My current vehicle isn’t getting the job done and I’m car shopping.

I don’t know that I’d be able to just wipe out all of that savings in one fell swoop.

That’s probably because I’m a hoarder. A collector. An accumulator.

But I wasn’t always that way…

The first big ticket item I ever really religiously saved up for was the Nintendo Entertainment System.

It came out when I was in the fourth grade. Jay Mooney, who was more of an acquaintance than a friend, lived up the street and was the first person I knew to actually get one. It was awesome.

It was even better than Intellivision. Even the rich kids with Colecovision were jealous of Jay Mooney.

I wanted one. Bad.

It was expensive and my parents weren’t about to spring for it.

It’s funny, to this day, I’m not really sure my mom can even pronounce Nintendo correctly… She wasn’t alone either. A number of my friend’s parents referred to it as, “Intendo”. Weird.

Maybe that’s why none of us actually got a Nintendo for Christmas in fourth grade (or fifth) — our parents were looking for something called the “Intendo” Entertainment System instead.

Any way, it was apparent that this was something that I was going to have to save up for myself.

Earning a sporadic $5/week wage (allowance) and $5 per lawn mow during the summer, it seemed as if I’d never get there.

The next door neighbor and I suffered the entire summer between 4th and 5th grade playing “Pitfall II” and “Congo Bongo” on the Atari 2600 on a 13-inch black and white television knowing full well that up the street, Jay Mooney was playing Mach Rider in full color.

We did the same the next summer too.

Looking back, we probably should have pooled our money.

Apparently the idea of “sharing” never crossed our minds.

But I remember getting really excited when I’d reached the $50 mark. I’d never had that much money in my life.

I could finally start to imagine having my very own Nintendo. To speed up the pace, I started pilfering $1/day from the lunch money my mother would give me each morning.

Being the dork that I was, I remember ironing all of the $1 bills I had so that they looked really cool all in a stack. I even taped a piece of paper around them like they do at the bank.

As months turned into years, it started to feel like I’d never make it, but I held on to the goal.

One day, the Nintendo Entertainment System would be mine.

Thankfully, at that point in history, Nintendo didn’t have any real challengers (like XBOX or Playstation), otherwise I’d have had to rethink my planned purchase.

Then, as luck would have it, my stash of cash got a major boost when my uncle slipped me a $100. “Shhhh… don’t tell your dad…”

I didn’t tell my dad about the $100, but it had to be pretty obvious. I mean, where would I have gotten a nice crisp $100 bill? Seriously…

My parents drove me down to KB Toys at our local mall (now torn down) and I had the privilege of asking to purchase one of their big ticket items. You know, the stuff that was kept behind glass…

It was so cool walking out of there.

That night, the Atari was disconnected for all eternity.

My sister and I hooked up the Nintendo full of excitement only to realize that, while we now had a Nintendo of our own, we only had two games (Super Mario Bros. and Duckhunt) and we’d played both of them to death over the past few years at friends’ houses.

It was pretty horrible stomping on goombas and koopa troopas without any sort of challenge.

The light at the end of the tunnel was, as it turned out, well, boring.

Back to saving I went…

Thankfully, while the system itself was too expensive for my parents to buy for us, the games were not.

Unfortunately the games I remember getting for Christmas were forgettable titles like “Jordan vs. Bird” and “A Boy and his Blob“…

A couple of years later, it was another year of saving for the Sega Genesis…

But now, like Cath, I can’t imagine spending every last penny in one shot — even if I’d saved up for it.

Out of Place…and Unsettling