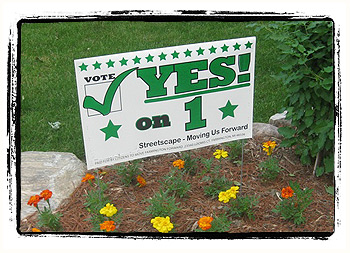 If you’re living in the United States, you’ve no doubt noticed all of the political lawn signs littering nearly every other house’s lawn.

Though I live in a traditionally “blue” state, so it’s not much of a surprise, it’s difficult not to notice that Obama signs outnumber McCain signs 10 to 1.

Though, given Connecticut’s presidential voting record over the past 10 elections, well, that’s not really unexpected.

But the more interesting signs are the more local “Vote Yes!” or “Vote No!” signs.

In some towns, it’s a referendum on whether a Walmart or Home Depot should be built in town. For others, it regards a new town swimming pool, or the formation of a dog park, or reduced City Hall hours.

At the state level, it’s usually about something boring like labeling organic food differently or something controversial like gay marriage.

It’s these signs, the Yes/No ones, that I’ve noticed the most this election year.

In my town, without going into the specific issue — it doesn’t really matter, “No” signs outnumber “Yes” signs at least 20 to 1. At least.

In a neighboring town, with a different issue on the ballot, their “Yes” signs outnumber the “No” signs in a landslide.

In both towns, it doesn’t seem to matter if you’ve got the Obama/Biden or McCain/Palin sign out front.

The local issues are seldom something decided down party lines.

But how are they decided?

See, in both instances, the more popular sign is the one that’s short-sighted and, well, wrong. Progress inhibiting, for sure.

That puts me at a total loss… Or does it?

My theory is that most of these folks don’t really know any of the details of the side they’ve decided to support and, then, showcase proudly on their lawn.

Using the Walmart example, the biggest opposition when it comes to a new Walmart always seems to be the added traffic each store brings.

At the time, the “No” signs heavily outweighed the “Yes” signs. Traffic, as it often is, was the issue.

A little back history first…

In the 1980’s, my home town had two regional department stores — Bradlee’s and Caldor. Just up the road, there was an Ames.

If you needed something, every one of those store would most definitely have it.

But, as everyone now knows, Walmart emerged from seemingly out of no where and went national putting pretty much every competing department store out of business in the process. Bradlee’s, Caldor, and Ames included.

So, here in town, we had three vacant “big box” stores. All at the same time — for years — and then Walmart came knocking.

Not to build a new store, but to take over one of the vacant buildings and restore an eyesore of a plaza back to it’s former glory.

Well, the people in town, obviously swayed by the sea of “No” lawn signs voted it down. Citing traffic or some such silly reason.

Walmart was not coming to town.

It didn’t take long before people started to realize — hey, if I need a 90-minute Memorex cassette or something, we don’t have any stores that sell that sort of thing anymore.

Where do you buy something like an alarm clock? Coffee maker? Cheap jewelry? Socks? Head phones? Shower curtain? School supplies?

You could buy all of that stuff 25 miles away where they put a Walmart into an old shuttered Bradlee’s!

Voting “No” was stupid.

Now, 15 years later, of course, a Walmart occupies that former Caldor building. Bradlee’s was torn down to make way for an expanding grocery store and a new movie theatre. Ame’s former location is now a Tractor Supply Co.

But for 3 or 4 years, all three buildings sat vacant. And people in town had to travel to neighboring towns to buy, well, all of their dry goods. All of them. We had grocery stores and car dealerships. That’s it.

Now that’s how to drive a local economy…into the ground.

Remember, the most vocal are usually the least informed.

So, come November 4th, when you’re filling in the circles on your ballot, be sure to select the option you saw the least of during your drive to the polling station.

Chances are, that will be the wiser decision.