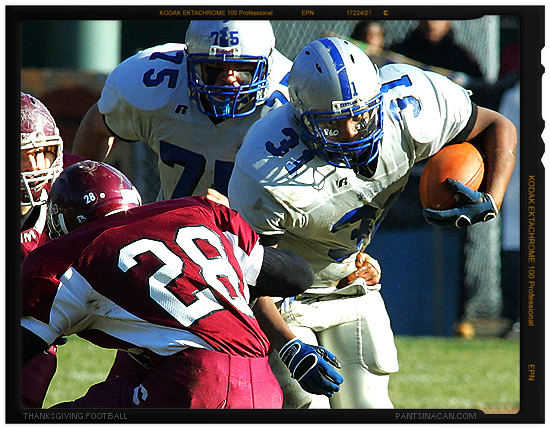 As we did last year, we attended the local high school football game on Thanksgiving.

Unfortunately I don’t have any exciting stories about picking up a dropped nickel.

Trust me, I was looking too…

Tickets were $6 each; a twenty percent increase over last year.

Being cheap, I found that to be a little excessive considering all of the moaning about the economy.

But the crowd didn’t seem to mind — it was a packed house as it always is. It’s crazy when you hear the roar of the crowd rival an NFL game when all they’re there to see is a high school game. Three weeks ago, the crowd would have been maybe 50 people — if it was warm out.

Thanksgiving? A couple thousand. The place is a mob scene. Parking. Nightmare.

I’d bet the kids on the field love it, though.

I mean, each year, it has that pro feel — I don’t ever remember feeling that in high school.

Like a pro game, the game is on television (public access, but still…) with real announcers from the local affiliates. They even had a sideline reporter?! The end zone was dotted with photographers with HUGE lenses, like me. The stadium even has souvenir stands — and they were open!?

Basically, it’s an event even if you’re not on the field and that’s why we go each year.

I guess you could call it the SuperBowl of our town. Seems that everybody goes — though I strangely didn’t recognize anyone there.

On the downside, going to the game also means that we miss the Macy’s Thanksgiving Parade each year. My wife is not happy about that.

And for the record, the team in white won the game. Woo-hoo! They represent our side of town!

Finances, 10 Years Ago – Now and Then: How My Current Financial Situation Compares with a Decade Ago